The Federal Reserve Board and a Congressional stimulus package helped douse the municipal market’s recent fire sale, but Nicholas J. Foley cited an issue involving big mutual funds and said market health might have ultimately improved had the burning been allowed to continue a bit longer.

“We had a fire sale for I’d say two or three days,” the manager said, adding that without the Federal Reserve Board’s 20 March announcement that it would expand its liquidity support for money market mutual funds to include loans secured by short-term munis and the Congressional stimulus package, which included additional Fed support for munis, the selling would likely have continued for a month.

“I just don’t think we flushed out the real issue here,” said Foley, whose Segall Bryant & Hamill Municipal Opportunities Fund (WITAX) as of Monday (30 March) had the highest three-year return among its Morningstar Category peers at 4.94%, according to Morningstar Direct.

The issue is that municipal mutual fund inflows have become concentrated among a handful of big firms including the Vanguard Group, Inc.; BlackRock, Inc. and Nuveen, Foley said, citing an issue described in some July 2019 press reports. When they need to sell, the buyer universe that could conceivably absorb USD 50m blocks of bonds is limited to other big fund players who are also facing redemptions, he said.

“Nuveen’s high yield fund got to USD 25bn. There’s no marginal buyer on the other side of that,” said Foley. “It’s made the market more dysfunctional.”

“You have to question at some point if these things have systemically become a risk,” Foley said. “It’s frustrating to watch, but it is what it is.”

The largest contributor to volatility in municipals sparked by the novel coronavirus (COVID-19) is a change in investor behavior, John Miller, head of municipals at Nuveen, said in comments provided to Debtwire Municipals via a spokesperson.

“Retail investors suddenly shifted from trading as an interest rate driven marketplace, to a credit driven marketplace, and credit concerns jumped,” Miller said. “We were coming off an extremely stable market with 60 weeks in a row of uninterrupted inflows which totaled over [USD 100bn] to a 2-3 week period of [USD 30bn] in outflows.”

What the market is experiencing is a “shock to the system which created immediate selling pressure,” he said.

Thomas G. Doe, president of Concord, MA-based Municipal Market Analytics, Inc., said while concentration of fund assets among a handful of firms played a role, it was one factor among several that exacerbated the selloff.

“Is it systemic? I’d say it’s problematic,” Doe said, adding, however, that he understood Foley’s point. “In an ideal world you wouldn’t have such concentration that evolved, but the mutual funds were simply responding to a low-rate environment. They were trying to maintain their business operations, so they lowered fees.”

Big mutual fund players have benefitted the municipal market by providing an appetite for bonds, he said. It was easy to underwrite bonds in 2019 because they could be placed easily with a Vanguard, Nuveen, BlackRock or MacKay Shields LLC, Doe said.

“So what happens then is your relationships with other market participants start becoming fallow,” Doe said.

Historically, when the municipal market has undergone periods of adversity that has coincided with mutual fund outflows, he said.

“This is the Achilles’ heel of the municipal bond market, which has been in existence since mutual funds were created and capital was aggregated in that manner,” Doe said.

What the recent selloff really underscored is what the price tag for liquidity can sometimes be in the municipal market, he said.

“Periodically, the cost is extraordinarily high,” Doe said. “And I would argue that what could be done better as an industry is articulating that risk at the time of sale of a fund share to an individual investor.” 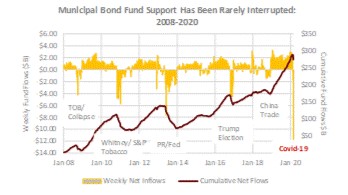 What contributed to the speed with which municipal rates rose and later fell was when those handful of firms that have won the lion’s share of municipal inflows needed to sell, they were selling into a secondary market where three things had occurred, he said.

“One, there’s a greater distance between the security dealer and the institutional investor,” Doe said, adding that technology has lessened reliance on personal relationships. “There wasn’t an opportunity to work a situation calmly or quietly or with less disruption to the market.”

The second factor was that the risk management programs that broker-dealers had in place – many of which employ US Treasury securities or derivatives – were moving in an opposite direction from the municipal market, he said. That meant those risk management strategies were generating losses instead of insulation from interest-rate risk, Doe said.

“The point being is that preceding the outflows from the mutual funds and the need of funds to sell bonds to raise cash is that the banks were already concerned about their capital -- what they had available to provide liquidity,” he said.

The third factor was the evolution of using algorithmic trading models, Doe said.

“The municipal market became very comfortable with the use of algorithmic trading over the last six or seven years because there was relatively low volatility and we basically had markets that were generally pretty good,” he said.

However, during the selloff, the algorithmic bids came in far below sellers’ expectations, Doe said.

“So that when blocks were being sold either through the bids-wanted process or listed in the form of a secondary offering [what happened] is that the algorithm gets adjusted and the bid gets adjusted lower and lower and lower,” he said. “So that the cost of liquidity, as I call it, becomes higher and higher and higher because the price falls really fast.”

Many broker-dealers use algorithms to provide bids, Doe said. In addition, recent years have seen additional participants enter the municipal market who are performing no other function but to trade the secondary market with their algorithm. They don’t underwrite bonds or have a banking presence, he said.

“So they’re just a speculator, if you will, in the municipal market,” Doe said, adding that in recent years they have provided a lot of liquidity.

The broker-dealers were nowhere to be found when the selloff hit, Foley said.

“You saw the broker-dealers absolutely disappear in a flash,” Foley said, adding that it was buyside to buyside during the height of the selloff. “And now, of course, they are all back and marking bonds up.”

The municipal market can no longer count on broker-dealers to be in the middle the way they used to be, he said.

Foley said if his Municipal Opportunities Fund ever gets to USD 1bn, “we’re going to close it.