Author(s): by by Will Caiger-Smith, Claudia Montoto and Catherine Perloff

After the Great Recession hit in 2008, the bank loan market all but froze up, giving way to a rise in direct lending. Now, more than a decade later and in the throes of yet another market crisis, private investors are once again finding the opportunity to step in and fill a void as formerly dependable sources of capital pull back from financing deals.

In the early days of the COVID-19 pandemic, deals from Expedia and Airbnb provided a glimpse into the shift to private credit. Even supermarket chain Albertsons, which saw lead-off benefits from the virus, opted to seek a solution from private equity and direct lending alternatives as volatility in stocks shook its IPO plans.

While the equity and high yield markets have rebounded since the initial crash, with aggressive central bank intervention buoying demand for both investment classes, the leveraged loan market remains subdued.

The cooling of this previously red-hot market opens a wide window of opportunity for private equity and direct lending firms, which have long sought to get their feet wet in riskier leveraged loan deals.

Now, those high risk credits that might struggle to access the traditional lending markets are expected to increasingly turn to private investors as a financing source, noted a managing partner at a major credit firm.

“Lots of companies are going to need these kinds of solutions,” the partner said. “The CLO market is not going to be anywhere near reliable enough.”

When COVID-19 and its impact on the market first reared its head, companies rushed to draw emergency funds from revolving credit lines, squeezing traditional bank lenders in the process. After that, bond investors stepped up to provide more permanent capital solutions for large companies like Carnival Cruises and Delta Airlines.

The Fed’s move to buy corporate bonds and high yield ETFs cemented the recovery of the high yield market. So too did its move to cut rates, making fixed-rate bonds more attractive for investors than floating rate assets.

Recovery in the loan market, however, has lagged amid mounting pressure on CLOs, which for years have been the biggest buyers of syndicated leveraged loans. 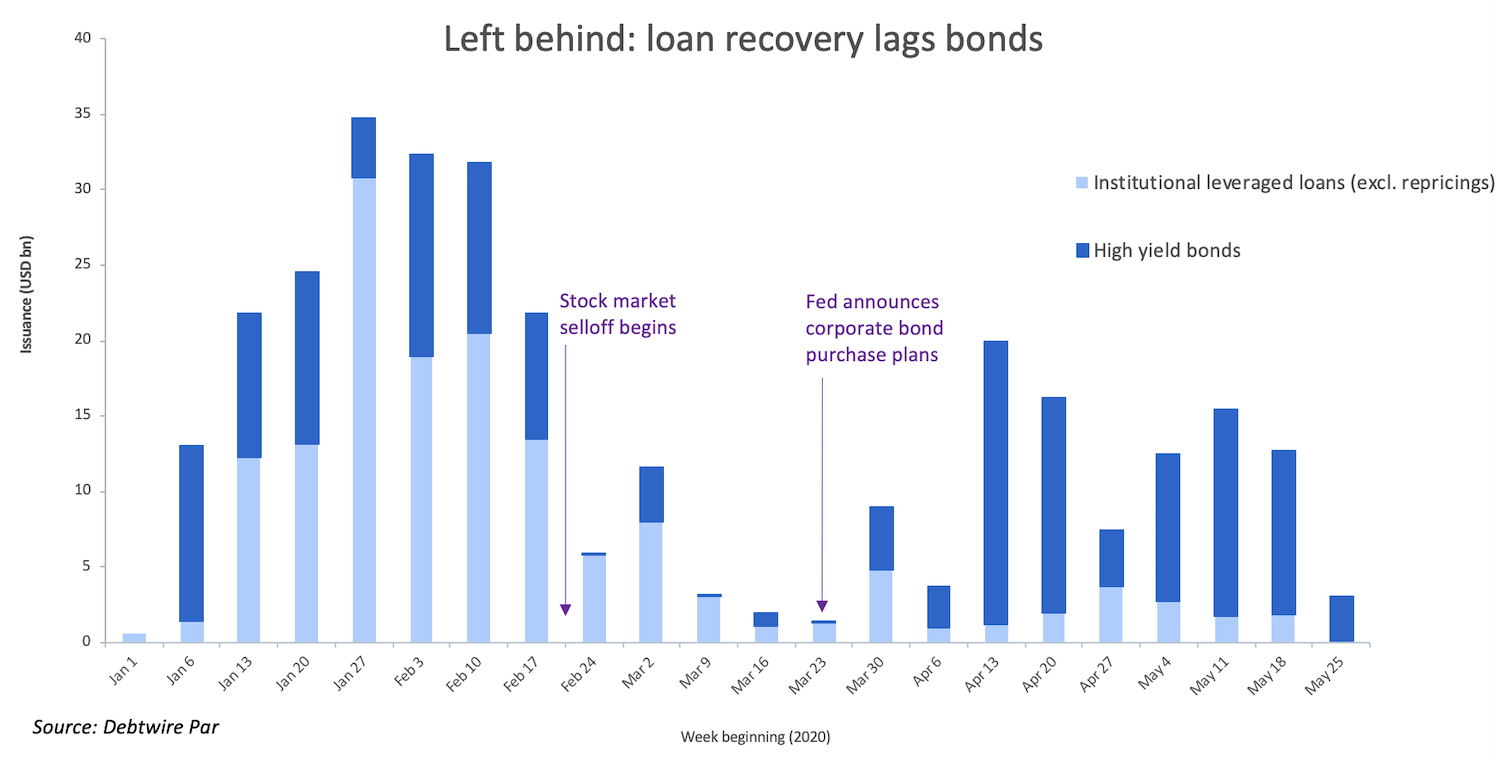 Many managers of existing CLOs are eschewing riskier deals as they breach limits on how much lower-rated debt they can hold. Already a concern before the crisis, this structural weakness has been exacerbated by a wave of downgrades on CLO portfolio holdings.

As these struggles escalate, new issuance of CLOs has collapsed, depriving the leveraged loan market of a critical source of funding for new deals. Just USD 4bn of new CLOs were issued in April, down from USD 30bn in February, according to CreditFlux.

With many CLOs shut out from riskier deals, direct lenders and opportunistic investors—such as hedge funds and the credit arms of deep-pocketed private equity firms—are eager to swoop in to provide the capital.

Opportunities include rescue financing for companies short on liquidity, or assisting firms that have the capability to buy businesses at distressed prices, according to one of the sources.

Private investments in public equity (PIPEs), meanwhile, have also more than doubled this year, as the downturn spurs companies to bolster their capital structures. Convertible bonds—whether public or private—are on the rise, as are other in-between capital formats like preferred convertible equity.

After the virus derailed Airbnb's plans for an IPO, the collateral-lite consumer-driven company opted to lock in a USD 1bn Libor+ 750bps term loan from firms including Apollo and Owl Rock, as well as a USD 1bn junior debt and equity hybrid from Silver Lake and Sixth Street Partners reportedly carrying a 10%-plus coupon.

Silver Lake and Apollo also teamed up to inject USD 3.2bn of capital comprising debt and preferred equity into online travel booking company Expedia last month, after the company disclosed on 13 March that the pandemic’s impact would be worse than previously expected. 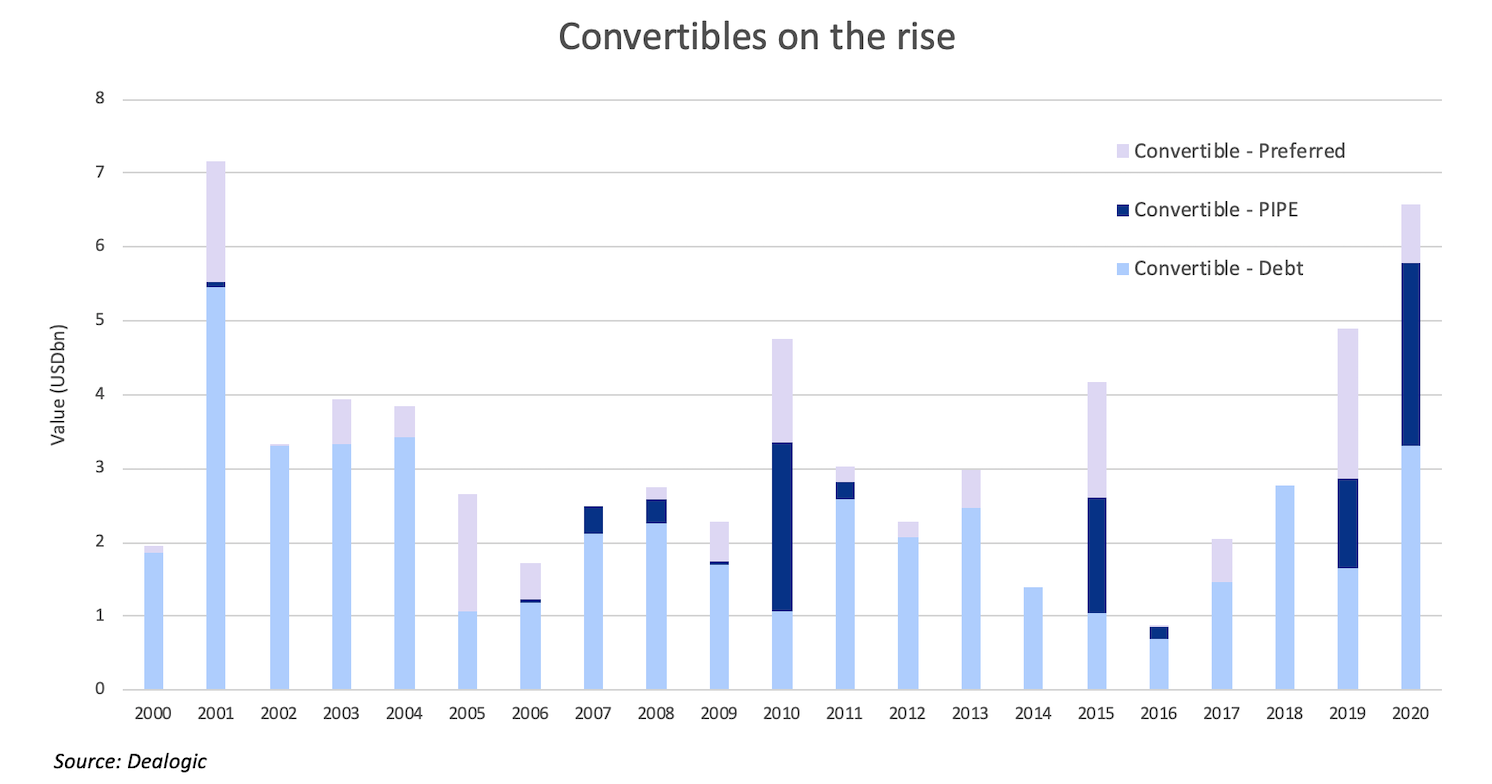 Apollo, which has extensive experience in the consumer retail sector, saw value in Cerberus’s pitch—a stake in a company that has become a lifeline for consumers during the pandemic, in a structure that offered significant upside potential but also downside protection.

Apollo also brought in HPS to share the deal. The private lender provided approximately USD 600m of capital, becoming one of the supermarket chain’s major investors. The preferred equity investors were given two board seats as a result of their investment in Albertsons. Apollo, HPS and Cerberus declined to comment for this article.

“You are going to see more capital from private equity and credit funds coming into pre-IPOs to fill the void left by public markets,” said a source familiar with the deal. “You’re also going to see more hybrid structures where private capital creates a platform, where short-term risks and a future upside are shared.”

Since markets crashed in late February, at least nine companies have formally withdrawn planned IPOs, while nearly 20 private equity-backed M&A transactions have been officially cancelled, according to Dealogic.

Click through for Dealogic data on withdrawn IPOs, cancelled private equity M&A and PE investments in private and public companies.

With the expectation that similar deals will crop up as the pandemic continues to exert pressure on companies in the coming quarters, large direct lenders and private equity firms alike are busy raising money for the onslaught, the sources said.

“The obvious ones came out early,” a senior executive at a direct lending firm noted. “The broader subset of opportunities in secondary and tertiary-impacted business will play out in the next two to three quarters.”

Owl Rock, a poster child of the pre-crisis boom in direct lending, is raising a new fund to offer financing to companies hit by the pandemic.

Some direct lenders are also backing companies that previously relied on another cooling market: venture capital.

Food delivery app DoorDash—which was eyeing a public listing—is one example of this trend. In February, the firm raised a USD 340m convertible bond from a group of investors led by Owl Rock.

Falling VC valuations sparked some convertible deals even before the coronavirus—Juul Labs and NeueHouse, for example—but the trend is accelerating, sources said. Whether VC-backed companies were looking to raise another private round or go public, private credit firms can offer hybrid options that are more tailored to their needs.

“Previously there was so much venture capital out there,” said a senior executive at a major direct lending firm. “Now, they don’t want to print a down round, so companies are reaching out to firms that can provide structured equity.”

That doesn’t mean that every tech start-up can suddenly issue debt or hybrid securities, however. The economic recession coronavirus has triggered is leading to a shakeout, and companies that are less dependent on consumer demand will prevail, sources said.

“If a venture-backed company came to our firm and said I’m looking for a term loan, I’m first going to ask if it is enterprise-facing or consumer-facing,” said another direct lending executive. “Enterprise firms are more resilient.”

Direct lenders with less stable funding structures may fall by the wayside in the coming months. But as the post-pandemic reality begins to materialize, those that remain—along with other private investors—could play an increasingly mature role in the capital markets.

by Will Caiger-Smith, Claudia Montoto and Catherine Perloff