Author(s): by by Caitlin Devitt

Municipal market investors came aboard today for Washington Metropolitan Area Transit Authority's (WMATA) sale of USD 545m of revenue bonds, with the 10-year bonds pricing at a spread of 30bps over the AAA MMD benchmark, according to the preliminary wire.

The strong reception was due in part to a new security backing the AA-rated bonds, which rely on revenues from Washington DC, Virginia and Maryland, instead of ridership, which has suffered a big drop during the COVID-19 pandemic, market participants said.

“There’s a slight stigma because of the transit nature, but this particular deal’s security does not depend on ridership fares, it’s depending on the backstop of the states and DC,” said Karel Citroen, head of municipal research at Conning. “Those are still states and a commonwealth that are still of strong credit quality and the market will recognize that.”

Like all national transit systems, WMATA has suffered an abrupt drop in ridership, with rail ridership at just 6% of pre-COVID levels and bus ridership at 22%, as reported.

“Depending on their reliance on fare box revenues, rapid transit bonds in general sold off in March as investors digested the fact that ridership was down as much as 90% due to the onset of the COVID-19 pandemic,” said Blake Anderson, Mesirow’s Head of Strategy and Research.

For new deals "unless they come with a story around state sponsors sharing their federal dollars directly, as opposed to waiting for round four of federal aid, one would think they would come at a wider spread than comparable GOs," Anderson said. "Whether it is analytically justifiable is debatable, given the fiscal pressure we expect to see on many large urban general obligation credits.” 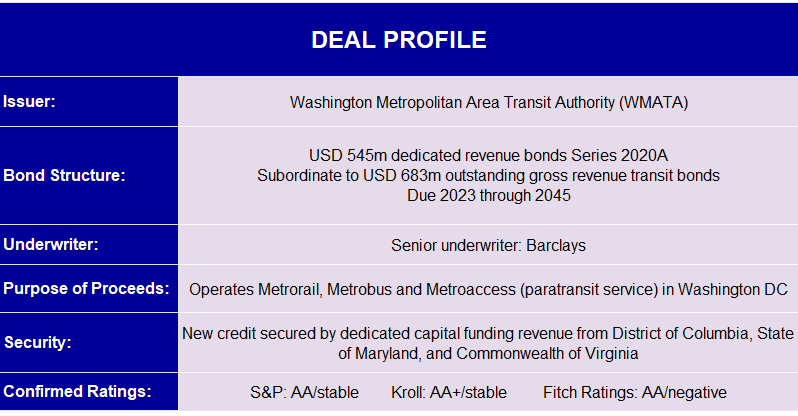 WMATA enters a market that is enjoying a nearly record rally since turmoil in late March.

“Yields have rallied, and we are bearing down on the lows we witnessed in early March,” said Vikram Rai, Citi’s head of municipal strategy, during Citi’s weekly municipal call.

“The richening is happening because of technicals, which are fickle,” he said. “The municipal market is a tinderbox and tends to ignite very easily. I don’t know what match will ignite the next fury of volatility.”

The technicals-driven rally may continue, Citroen said. There is massive federal aid being injected into the market and issuers will eventually have to be repaid, and that could translate into higher taxes, he said.

“One could make the argument that investors here are anticipating that and flocking toward tax-exempt securities.”

The state will pay 3.82% to place USD 1.2bn of one-year general obligation (GO) notes, according to a state spokesperson.

On the secondary market, the state’s one-year GO notes are trading at a spread of 345bps over the AAA yield.

“The Federal Reserve Bank worked closely with our team to make this transaction possible through the MLF, which is an important tool the state is using to answer the unprecedented economic challenges posed by the COVID-19 pandemic," said Alexis Sturm, director of the Governor's Office of Management and Budget, in a statement.

Governor JB Pritzker’s (D) strategy of asking voters in November to approve a graduated income tax to bring in new money may now be weakened by the pandemic and social unrest, Citroen said. “I’ll be curious to see if that even makes the ballot and how voters will respond to it,” he said. “Usually when these tax changes make it to the ballot, they have a high chance of passing. Now I’m not so sure about that.”