US intercity passenger rail investment has lagged other industrialized countries for decades. To improve the situation, parts of the USD 1trn Infrastructure Investment and Jobs Act (IIJA) provide approximately USD 66bn in new spending for passenger and freight rail programs over the next five years (FY22-FY26).

Beyond Amtrak, the most controversial aspect of the passenger and freight rail provisions in IIJA is regarding the new Strengthening Mobility and Revolutionizing Transportation (SMART) grant program. The SMART program would allocate USD 500bn towards providing municipalities with grants to test surveillance technologies that could improve transportation efficiency and safety such as remote biometric systems, sensors and drones.  Privacy experts are concerned that without safeguards, government surveillance could become excessive.

The table below lays out the key passenger and freight rail programs being funded by the IIJA. 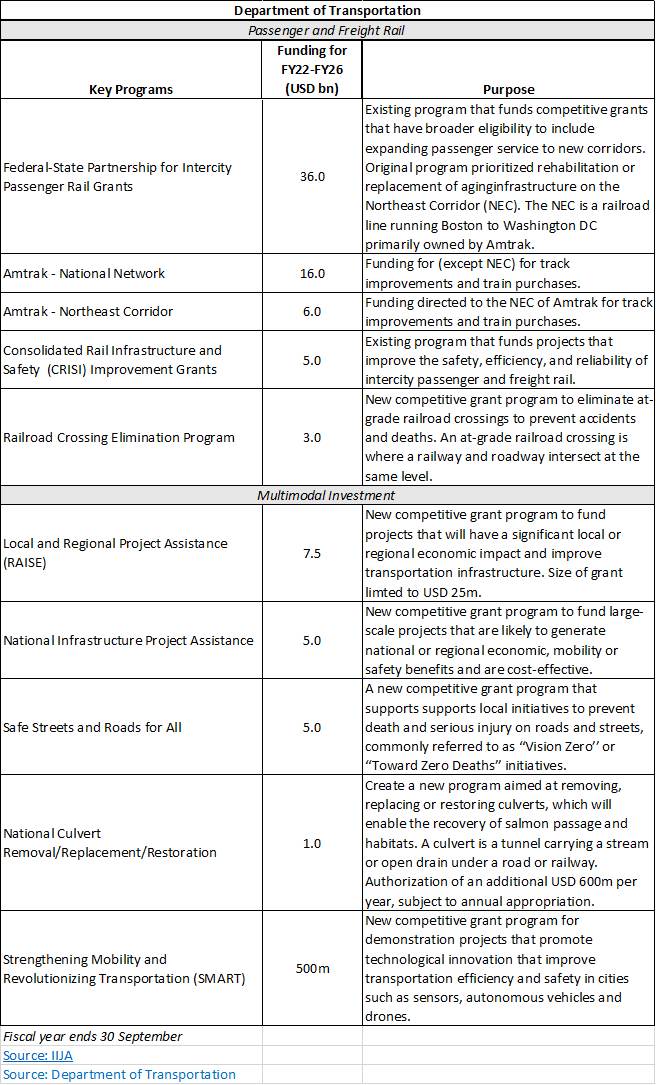 Amtrak’s vision over the next 15 years could have significant benefits for municipalities and by extension the tax-exempt bond market. The existing Brightline Florida and planned Brightline California projects represent opportunities to leverage funding from various competitive grant programs. Additionally, according to Rice University’s Kinder Institute for Urban Research, Sun Belt cities are poised for explosive growth that could benefit from intercity passenger rail.

There are a few significant challenges to intercity passenger rail expansion: 1) Funding for the substantial construction and ongoing operation expenses; 2) Still unproven that there is a large unrealized demand for this type of travel; and 3) Even if sufficient funding is available, railroad access remains a difficult negotiating point with private rail companies.

On 28 October, President Joe Biden announced an agreement for USD 1.75trn on the soft infrastructure legislation. As these negotiations continue, Debtwire Municipals, through our Bill in Brief series, will write periodic summaries on elements of the IIJA that directly affect state and local governments.