Hertz, the international vehicle rental group, recently (11 December) secured a convening order in respect of a UK scheme of arrangement forming part of its wider workout.   Launched by Hertz UK Receivables Limited, a UK-based subsidiary of the group, the scheme is aimed at injecting EUR 250m of fresh funds into the business to address its liquidity woes, while releasing existing bond debt in exchange for new longer-dated note with an enhanced coupon and security package.

The debt subject to the scheme amounts to circa EUR 731m and consists of two series of note: a EUR 225m 4.125% October 2021 tranche, and a EUR 500m 5.5% March 2023 tranche. In circumstances where insolvency is cited as the most likely alternative to the scheme, the scheme creditors, being the holders of the 2021 and 2023 existing note, will vote in a single class. 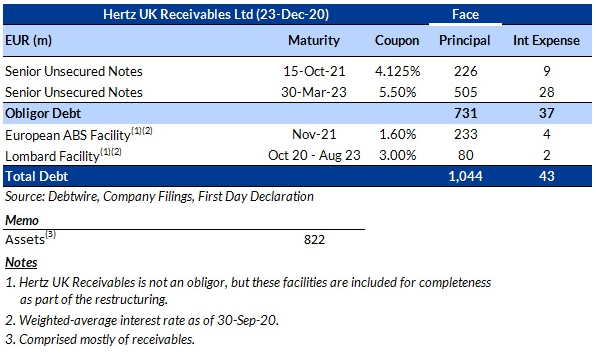 In November, Hertz launched consent solicitations to join the England-incorporated scheme company as co-issuer of the note, which were issued by Hertz Holdings Netherlands BV (HHN), while also switching the governing law and jurisdiction to England.

Under the scheme, Hertz International Limited (HIL) will issue EUR 250m of senior secured note (the HIL note), the proceeds of which will be lent to HHN. Scheme creditors will be given the option to subscribe for the HIL note, at the time of voting on the scheme.

Holders of the existing note who choose to participate (participating noteholders) will exchange their existing claims with first lien new note issued by HHN (New HHN first lien note).The face value will be equal to the current par value of existing note held by the participating noteholders (less sums paid by way of the proceeds of the US guarantee sale, see below). They will benefit from first-ranking security over certain valuable assets of the group.

Last year, the group launched Chapter 11 bankruptcy proceedings in the US Bankruptcy Court in Delaware with respect to the liabilities of certain US and Canadian entities. Under the scheme, scheme creditors will agree to the Chapter 11 debtors seeking an order permitting the total outstanding guarantee claims held by scheme creditors against the Chapter 11 debtors to be “bifurcated” from their claims against the scheme company and other group guarantors under the existing note, and for the US guarantee claims to be sold via an auction. Hertz filed that motion with the Delaware Bankruptcy Court on 23 December, and the court has scheduled a hearing to consider the relief on 26 January. The cash proceeds from the auction will be paid to all scheme creditors.

Holders of around 78% of the scheme debt had already signed up to a lock-up agreement in support of the scheme by a 7 December deadline. According to the Practice Statement Letter, dated 30 November, holders of 54% of the 2021 note and 56% of the 2023 note have signed a lock-up agreement in support of the transactions.  On 15 December, this ad hoc noteholder group, led by Aristeia Capital and Fortress Investment Group, filed a statement in the Chapter 11 cases disclosing its membership.  In the statement, the group revealed that it controls 85% of the 2021 note and more than 90% of the 2023 note.  Participating noteholders that are a party to the lock-up agreement (or who have acceded to the lock-up agreement by 7 December 2020) will be entitled to their pro rata share of a cash payment of a EUR 1.25m lock-up fee.

A sanction hearing has been scheduled to take place on 5 February. 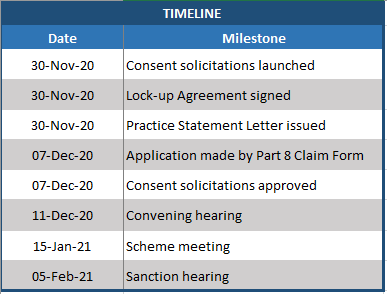 The creditor meeting is scheduled for 15 January.