Author(s): by by Rachel Butt

Oil & gas companies that overhauled their balance sheets amid the most recent bout of price volatility are facing another thorny problem: how to craft a compelling growth story.

Take Whiting Petroleum, whose shares have had a lackluster performance – down 13.6% – since the company’s emergence from bankruptcy on 2 September. Denbury Resources’ reorganized shares tumbled 21% to USD 16.50 after initial trading began on Monday, though they've rebounded to USD 18.80 today, and Battalion Oil Corporation (fka Halcón Resources) lost roughly 39% since it resumed trading on 20 February.

“They don’t have much of an equity story as to why anybody should own them,” an industry banker said. “An E&P company is not interesting unless it has scale and inventory to drill. And that it can actually pay its bills and a little bit of dividend.”

The lack of growth prospects has chilled M&A valuations, especially in bankruptcy 363 sales. As such, in many Chapter 11 cases the creditors face the choice of either accepting a bid that doesn’t even cover secured claims, or taking over the assets themselves despite dim exit prospects down the road, according to the banker, a restructuring advisor, two restructuring lawyers, two lenders and an industry source.

And in 2020-vintage E&P reorganizations, those secured creditors are often banks and par-style investors, as the lack of a growth story – and difficulty rejecting midstream contracts – has also cooled distressed investors’ interest in the oil patch, the sources said.

“Investors are in self-preservation mode. They just want to cut their losses and make sure things don’t get worse,” one of the lawyers said.

Bruin E&P Partners’ restructuring process is one of many typical cases. The company explored an auction process, but with its ABL lenders facing impairment in a sale, the company instead turned over more than 90% of the equity to the lenders, said a source close to the process. ABL recoveries were deemed 54% under the plan, which was confirmed last month, while unsecured noteholders got 7.5% of the equity and a 2.3% recovery.

Those dynamics continue among cases still in court, with Sable Permian facing the now-familiar script: bids in its bankruptcy auction have been lackluster, and a JPMorgan-led group of lenders is expected to take the keys, as reported.

And operators that have gone through with sales have largely done so at rock-bottom valuations—Templar Energy’s sale in July provided just a 21% recovery for RBL lenders.

The investor pessimism stands stark contrast to the 2015-2016 cycle, when the sudden drop in oil and natural gas prices led distressed investors to pile into E&P debt, perceiving opportunities to take over assets that they believed would recover. But many of the E&Ps they targeted wound up in Chapter 22 filings over the last year, including Ultra Petroleum, Halcón Resources and Fieldwood Energy.

“I see less of traditional banks wanting to take over [E&P assets], whereas alternative funds are more willing to do so for a commodity price play,” said the restructuring advisor, adding that the strategy nonetheless is to “hold out, minimize drilling, and see if prices rebound.” 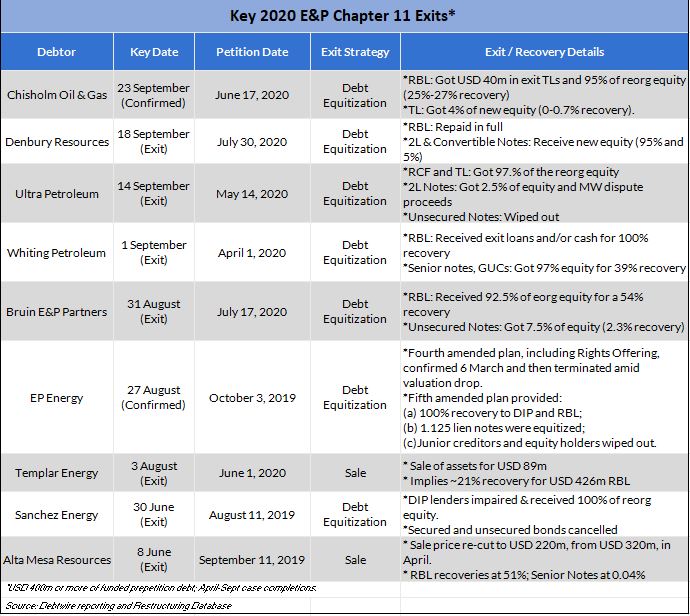 The pace of E&P bankruptcy filings picked up after March and peaked in June of this year, bringing the total count to 28 with USD 33.1bn of aggregate debt year-to-date, according to Debtwire's restructuring database. That’s up year-over-year from 26 filings and USD 17.9bn of total debt.

This time around, nearly all of the debtors blamed their descent on the sudden crash in oil prices— fueled by the price war between Saudi Arabia and Russia— and the demand loss driven by the coronavirus pandemic.

While oil prices have recovered from the historic lows seen in April (averaging USD 17/barrel), the US benchmark recently dipped below USD 40/barrel after Saudi Arabia cut its selling prices for October. Concerns that Libya would ramp up production, against stalling recovery in global consumption, further weighed on oil prices Monday (21 September).

Assuming prices remain around USD 40/barrel over the next two years, roughly 150 more oil and gas producers are expected to file for Chapter 11 through 2022, according to an analysis by Rystad Energy. That would bring the total amount of E&P debt at risk to USD 128bn. 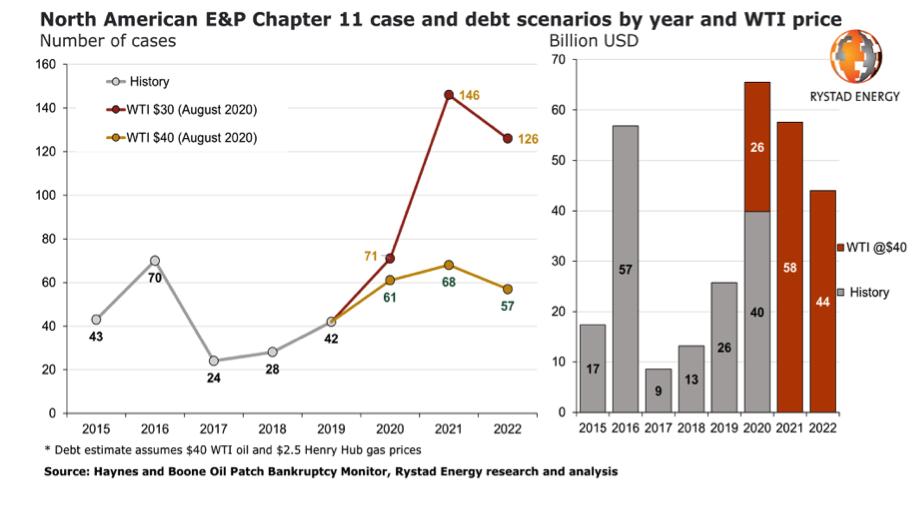 Amidst growing investor concerns about the long-term health of fossil fuels, oil majors (with the exception of ExxonMobil) took sizeable write-downs and began to build their strategies around renewable energy.

BP Energy struck a decisively bearish tone in its annual energy outlook published on 14 September. Under the two scenarios that assume more drastic policies and behavioral changes to reduce carbon emissions, the supermajor said oil consumption may never fully recover to levels prior to the pandemic, implying demand has already peaked in 2019.

That’s a major shift from last year, when BP projected demand to grow over the next decade before plateauing in the 2030s.

In a landscape filled with ambitious emissions goals and tepid exit opportunities, post-restructured oil and gas producers will have to tread carefully to avoid turning into “zombies” with depleting reserves and languishing value, according to the industry banker and two lenders.

Take, for instance, Sandridge Energy, which has minimal net debt and trades at a 1-1.5x EV multiple, a banker noted. “They have a nice balance sheet, but nobody cares.”

Given the outlook, even if a buyer is interested in E&P assets, it’s challenging to raise capital to back a deal. “I don’t think anyone wants to put in new money in this sector right now. The capital markets are largely closed,” said one of the lawyers.

Indeed, the debt capital markets have proved muted for E&P companies, even as total high yield volumes hit record issuance this year. Oil and gas operators issued just USD 11.85bn of high yield deals year-to-date – compared with USD 313bn in total US-dollar YTD high yield issuance as of 18 September, according to Debtwire data. The E&P deals that priced were largely for higher-quality operators like Occidental Petroleum and Apache Corp – and only one of the deals was to fund M&A activity.

At the same time, only one of the E&P bankruptcy exits so far this year involved raising cash via a rights offering (Ultra Petroleum’s USD 85m) – though at least three more are currently contemplated in pending cases (Chesapeake Energy, Chaparral, and California Resources).

The tepid interest is also evident in the outcomes of recently attempted opportunistic exchange offers. Great Western Petroleum and Callon Petroleum sought to extend their maturities through uptiering exchanges, but ultimately scrapped the offers as investors took a harder stance given the double whammy of the pandemic and weak oil prices environment. 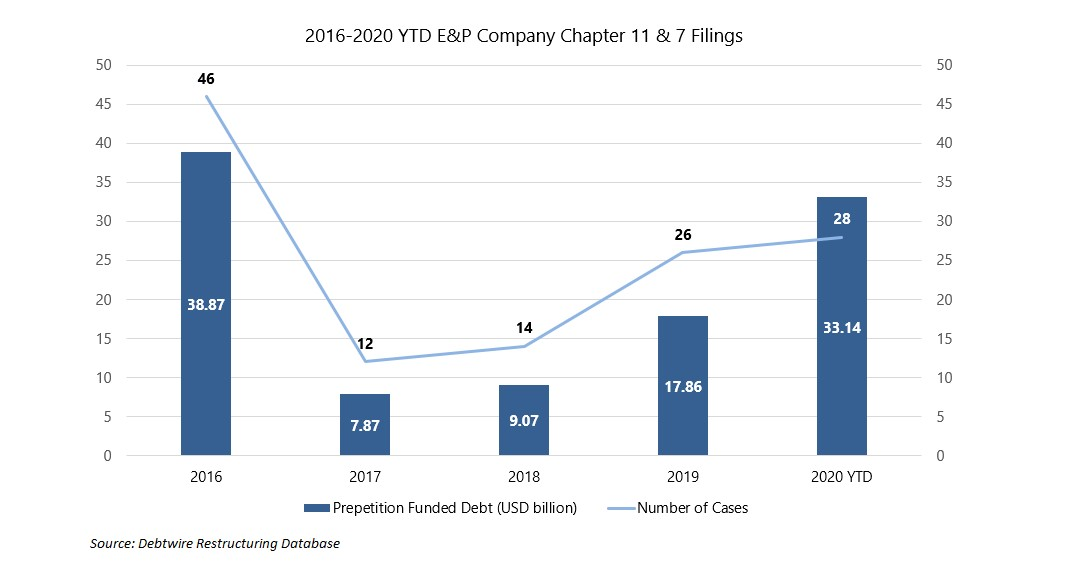 E&P companies that are susceptible to borrowing base cuts during the upcoming fall redetermination, or have hedges rolling off at year-end, will comprise the next round of restructuring candidates, said the restructuring advisor and industry player. Oasis Petroleum had a 52% borrowing base cut in the spring and entered into a 30-day grace period after skipping several coupon payments due on 15 September, while Gulfport Energy's cash flow is set to shrink absent a price recovery and as its hedges roll off.

“If market prices remain where they are today, I think we’ll see another wave in late 1Q and possibly 2Q of people just running out of headroom with their lenders,” the industry source said.

Given the steep discounts and large impairments seen in recent 363 sales, revolver lenders for distressed companies that haven’t yet filed will likely attempt to strike a balance of putting adequate protections – such as downsizing borrowing base and installing anti-cash hoarding provisions – without pushing the borrower into bankruptcy, sources said.

WTI prices will likely average roughly USD 34/barrel this year, before inching up to USD 38/barrel in 2021 and USD 39/barrel in 2022, according to several banks’ recent price decks. Meanwhile, monthly spot gas prices are expected to average USD 3.19/MMBtu next year, up from USD 2.16/MMbtu in 2020, according to the US Energy Information Administration.

Oil and gas producers that already restructured will be focused on cutting costs in the near-term, and potentially be acquired by regional players that are able to grow reserves at current prices, according to two lenders.

“Ultimately, these [zombie] companies will become the target of an aggregator where they’re just purchasing the PDP cash flow and there’ll be G&A cost savings,” one of the lenders said. “The [resulting company] can then use PDP cash flow to fund their development needs.”