[Editor's note: This updates Debtwire's 16 December report on lender activity in the energy sector to include a statement from ABN AMRO in paragraph 21.]

Oil and gas companies have long relied on support from mid-sized domestic banks and major foreign banks to fund their needs. But the inevitability of clean energy solutions alongside the persistent wave of E&P distress has myriad lending institutions – including ABN AMRO Bank, Societe Generale, and East West Bank – ready to drill down on respective efforts to further reduce exposure, according to two bankers familiar with the situation and six buyside sources focused on the sector.

In the case of East West Bank, the Pasadena, California-based entity has been fielding reverse inquiries and gauging secondary market interest for its bankrupt E&P credits as it lays the groundwork for a potential exit, five of the buysiders noted. East West is largely a participant lender active in smaller syndications and sponsor-backed companies, two of the sources added.

East West’s foray into energy had been in expansion mode since 2013, when it grew its footprint in the Texas market through the acquisition of MetroCorp Bancshares. The bank hired Christina Kitchens in 2015 to lead the energy finance platform and increase sector exposure heading into the downturn, focusing on USD 5m - USD 500m senior debt lending to upstream and midstream middle-market companies.

But the torrent of oil and gas downgrades and underperformance necessitated a strategic pivot. Excluding power and clean tech, energy finance comprised 12% of the bank’s commercial and industrial loans (C&I) at YE17. The share has since dwindled to 9% at 3Q20. There were USD 1.18bn in oil and gas loans outstanding and USD 320.1m in unfunded commitments as of 30 September, according to East West’s 10-Q filings. Its portfolio mix within the sector was led by E&P companies (60%), followed by midstream and downstream companies (33%), and oilfield services companies (7%). 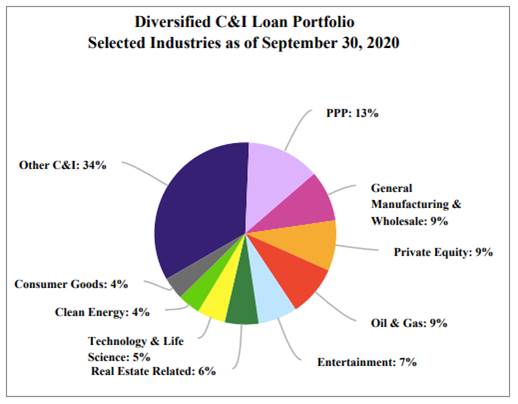 “In terms of oil and gas, I'd like to note that we continue to reduce our exposures through paydowns, workouts and charge-offs,” East West Bank CFO Irene Oh said on the 3Q earnings call. East West boosted allowance for loan loss coverage for its oil and gas portfolio to 10% at 3Q-end, up from 5% at YE19.

The bank is still mired in several distressed situations. For instance, it agented a USD 22.35m secured loan to Sklar Exploration and affiliate Sklarco, which filed for Chapter 11 on 1 April and swiftly faced pressure to appoint a Chapter 11 trustee or convert the case into a liquidation. The debtors have yet to file a reorganization plan, despite several deadline extensions. A mediator could be brought in to assist with plan negotiations, court filings show. Meanwhile, East West is trying to trade out of the situation, according to a banker, buysider and an industry source.

East West Bank is also a lender to New Emerald Energy, which filed for bankruptcy in May with USD 38.2m in secured debt.

The debtor ran an auction process and determined that prepetition lenders’ USD 18m credit bid represented the best and highest offer. At closing, the assets will be transferred to Dakota Midstream, a pipeline operator that services New Emerald, court filings show.

Recent activity around managing volatile positions also extends outside of bankruptcy. East West Bank in September reached a restructuring agreement with oilfield servicer Enservco to reduce the size of the credit facility in exchange for equity.

The pullback from oil and gas loans is accompanied by a downsized energy team, two of the sources said. Kitchens left the bank in September to start 3P Energy Capital, a middle market-focused firm that offers refinancing options and assistance on exits from dysfunctional bank syndicates.

“East West came into the space pretty aggressive in an effort to build out their energy group," the first buysider said. “They wanted to become a full-service bank, when most banks of their size are just trying to be participants.”

Opportunistic buysiders are also circling Bank of Montreal (BMO) for the chance to trade into oil and gas holdings, the sources said. BMO reportedly is in the process of winding down its US oil and gas investment banking business, and CEO Darryl White said the bank is winding down its presence in non-Canadian energy markets, according to 4Q20 earnings call.

“Going forward, BMO Capital Markets Energy business will be focused on the Canadian energy market, where we believe our competitive positioning is strongest and where we will continue our deep and long-standing commitment to supporting clients,” White said.

The Canadian bank is cutting about 50 positions in its investment banking group and keeping a handful of corporate bankers to manage its US oil and gas loan book, according to a Bloomberg report on 30 November.

As of 4Q20, BMO’s US oil and gas loan book totaled USD 7bn. The sector’s gross impaired loans reached USD 550m at quarter-end, with USD 457m stemming from the US.

On top of poor performance, certain foreign banks are retreating from fossil fuels as a way to accelerate their transitions to renewable energy.

Societe Generale recently attempted to auction more than USD 1bn in oil and gas revolving credit exposure, following its October announcement to become a leader in sustainable finance and energy transition. But the overall auction process was deemed unconstructive due to the wide bid-ask gap, as reported.

The effort in recent weeks has seen the French bank agree to sell roughly half a dozen of credits, but is keeping the rest on its book for now, three of the sources said. “Generally, the trades happened in the 80s and low 90s range—not distressed credits but not strategic for anyone else to buy at any point,” one of the sources said.

ABN AMRO Bank is expected to embark on a similar marketing process, after turmoil in the offshore energy market resulted in large impairments and two consecutive quarters of net losses this year, four of the buysiders said.

The Dutch bank booked around EUR 99m impairment charges during 3Q20, citing the COVID-19 pandemic and low oil prices. It is expecting EUR 200m in further write-offs in 4Q20, mainly due to oil and gas investments. Meanwhile, it is targeting its renewable energy commitment to reach 20% this year, from 16% at 2Q-end.

ABN issued the following statement to Debtwire today (12/17): "Over the coming 3-4 years we will be winding down our non-core business. Non-core is all the business outside of Europe, except for Clearing. So we’ll wind down our energy positions outside Europe, but not inside Europe. We are open to portfolio sales, but not willing to take large haircuts."

Back in August, the bank announced that it’s ended all of its trade and commodity finance activities, and directed focus of its natural resources and transportation and logistics group to European clients only. Earlier in 2018, ABN’s private equity group launched an energy transition fund, involving companies that contribute to a low-carbon future.

by Rachel Butt and Catherine Perloff