Stream TV Networks Inc and SeeCubic—a vehicle of StreamTV’s secured convertible noteholder—today traded arguments as to whether StreamTV filed for Chapter 11 protection in good faith, or if it launched the bankruptcy to evade the consequences of a Delaware Chancery Court litigation.

Judge Karen Owens of the US Bankruptcy Court for the District of Delaware presided over the beginning of what is expected to be a two-day hearing on motions to dismiss Stream TV’s Chapter 11 case, filed by SeeCubic and the US Trustee’s office involved in the bankruptcy.

During today’s proceedings, Judge Owens heard opening statements from lawyers representing parties both supporting and opposing SeeCubic’s efforts to dismiss the Chapter 11 case. So far, the judge has also heard witness testimony from Mathu Rajan, a co-founder of Stream with his brother Raja Rajan, as well as from Timothy McCarthy, a board member at Visual Technology Innovations Inc (VTI), a proposed debtor-in-possession (DIP) lender to Stream.

Judge Owens is expected to preside over a full day of proceedings today, with the parties scheduled to return on Tuesday (11 May) afternoon to finish the dismissal hearing. Judge Owens has not indicated when she might issue a decision on the dismissal motions.

Stream TV’s unsecured creditors committee (UCC) has also supported the SeeCubic dismissal motion under a settlement agreement with the secured Stream lender, through which SeeCubic has offered to pay USD 225,000 of the UCC’s professional fees and provide a USD 2.5m promissory note for the benefit of Stream’s unsecured creditors.

Stream, which filed for Chapter 11 protection on 24 February, has faced efforts to have its bankruptcy case dismissed since its early stages. In its dismissal motion, SeeCubic argued that the Chapter 11 filing marked the latest effort of the Rajans, Stream’s founders, to back out of a restructuring deal reached in 2020 between the company’s independent directors and secured lenders.

SeeCubic has maintained that through that restructuring deal, the committee of Stream independent directors approved an “omnibus agreement” that called for the transfer of Stream’s assets to the lenders as a result of a default on secured debt. The omnibus agreement later became the focus of a ruling in Delaware Chancery Court that imposed a preliminary injunction, effectively prohibiting the Rajans from taking a series of actions related to Stream TV or its assets.

For its part, the US Trustee said that SeeCubic’s allegations in support of dismissal raise fundamental concerns about whether Stream belongs in Chapter 11. The US Trustee has questioned, for example, whether SeeCubic’s position that all of Stream’s assets have already been transferred leaves anything to reorganize around or sell through bankruptcy.

In response, Stream—with backing from its proposed DIP lender, VTI—has argued that it sought Chapter 11 protection for legitimate purposes and that dismissal would serve to benefit Stream’s secured lenders at the expense of unsecured creditors. During today’s proceedings, a lawyer for VTI noted that his client has proposed to inject between USD 180m and USD 500m into Stream, with the goal of sponsoring a Chapter 11 plan that would pay all of the company’s creditors in full and allow Stream to develop its technology further.

“Normally in a bankruptcy that would be welcomed with trumpets and open arms,” said VTI lawyer John Sten of Armstrong Teasdale. 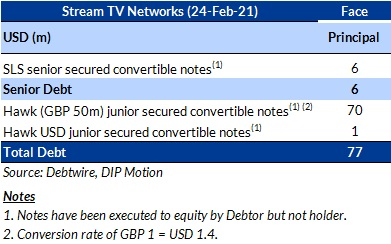 Stream was founded in 2009 as a new media company, aiming to launch technology allowing TV and tablet makers to convert 2D devices into 3D ones without viewing glasses, according to bankruptcy court filings.