Remington’s confirmation proceedings began Monday, and were adjourned after Judge Clifton Jessup of the US Bankruptcy Court for the Northern District of Alabama accepted some revisions proposed by the tort claimants, led by families of victims in the 2012 Sandy Hook school shooting. The Sandy Hook families had argued that the proposed plan put too many roadblocks in the way of their potential recovery against Remington’s insurers, and Judge Jessup agreed, especially given that the plan did not give them any recovery other than the right to litigate.

Judge Jessup ordered Remington to amend the plan with two of the revisions proposed by the Sandy Hook families, making it easier for tort litigants to resume their cases for the purposes of obtaining a nominal judgment against Remington and consolidating the first phase of insurance litigation in the bankruptcy court. When those revisions were not complete within a day of the oral ruling, Judge Jessup chastised Remington for being seemingly unprepared to address some of the practical ramifications of its Chapter 11 plan, and adjourned the confirmation hearing until today.

One of Remington’s insurers, Ironshore Specialty Insurance Co, raised objections to the revisions. Judge Jessup had previously overruled Ironshore’s objection to the plan, and he overruled some of their new objections during the hearing today. Some of Ironshore’s newly raised concerns, however, were resolved through further compromise with Remington and the Sandy Hook families, which had not included Ironshore in their negotiations.

In its newest objection, Ironshore had sought to broaden insurers’ ability to litigate outside of bankruptcy court, asking that the confirmation order allow them freedom to file a motion to withdraw the initial litigation from bankruptcy court and to start coverage litigation in forums of its choosing. The revised order did not fully meet those demands, consolidating the threshold litigation over “self-insured retentions” – minimum payments that Remington must make in its own defense before insurance coverage kicks in – in the bankruptcy court.

Judge Jessup thanked Remington and the Sandy Hook families for working together on the revised confirmation order, saying that compromise “sometimes is painful” in cases like this. Remington’s attorney, Steven Warren of O’Melveny & Myers thanked the Sandy Hook families’ “practicality and responsiveness” in the final negotiations. Once the additional changes are made to address Ironshore’s concerns, Judge Jessup said he would sign the confirmation order, likely later today.

“With the changes that were discussed this morning, the confirmation order is prepared to be entered,” Judge Jessup said.

Judge Jessup also approved interim fee applications for attorneys and professionals working on the case during today’s hearing. O’Melveny & Myers received approval of USD 4m in fees and USD 60,000 in expenses for work performed as Remington’s bankruptcy counsel from 1 October 2020 to 31 December 2020. Fox Rothschild, as counsel to the unsecured creditors’ committee in the case, received approval for USD 400,000 in fees for that period.

Remington’s liquidation plan will deliver the bulk of the proceeds from seven asset sales to prepetition lenders, whose debt dates back to the exit facilities created at the end of Remington’s 2018 Chapter 11 bankruptcy case. Tort claimants, including the Sandy Hook families, will not participate in a general unsecured claims trust set aside for other creditors, but instead will be allowed to pursue recoveries against Remington’s insurance coverage. 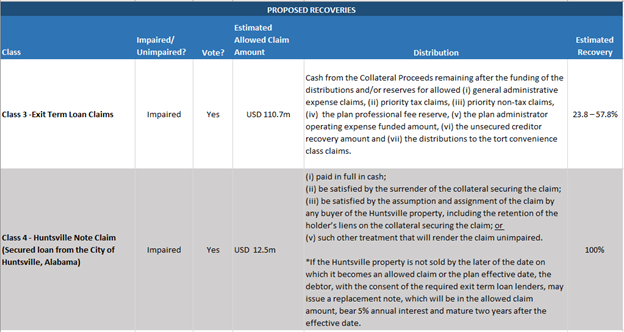 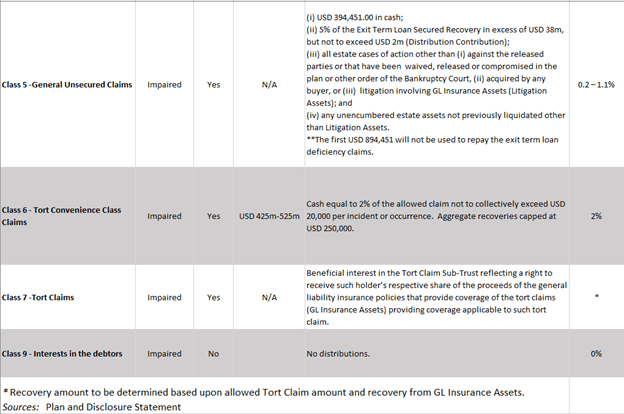