Purdue Pharma has filed a disclosure statement and reorganization plan centered on the contribution of USD 4.5bn from the Sackler family and the dissolution of the company, with future non-opioid businesses owned by two opioid abatement trusts.

When Purdue filed for Chapter 11 in September 2019, it reported that the Sacklers, who own the company, would contribute at least USD 3bn toward resolving more than 2,600 lawsuits from opioid claimants and government agencies. The Sacklers, under the plan, have upped that amount to USD 4.5bn, with USD 225m having already been paid to settle a civil judgment with the US Department of Justice, leaving USD 4.275bn for creditors. That and other agreements in the plan are the result of extensive mediation between the parties.

Purdue “will cease to exist.” Its pipeline of “non-opioid investigative candidates” would be transferred to a newly created company directly owned by two opioid abatement trusts that would develop opioid reversal and addiction treatment medications. The trusts would be authorized to develop an “unlimited amount” of those medications once complete. The company estimates that a total of USD 5bn in value would be provided to the trusts, plus another USD 700m-USD 750m to make payments directly to qualified personal injury claimants.

The new company would be governed by a board of seven disinterested and independent directors, to be selected by the ad hoc opioid victims’ committee, in consultation with the debtor and unsecured creditors committee in a process subject to observation by the DOJ. Purdue reports in its disclosure statement that the DOJ supports the plan. 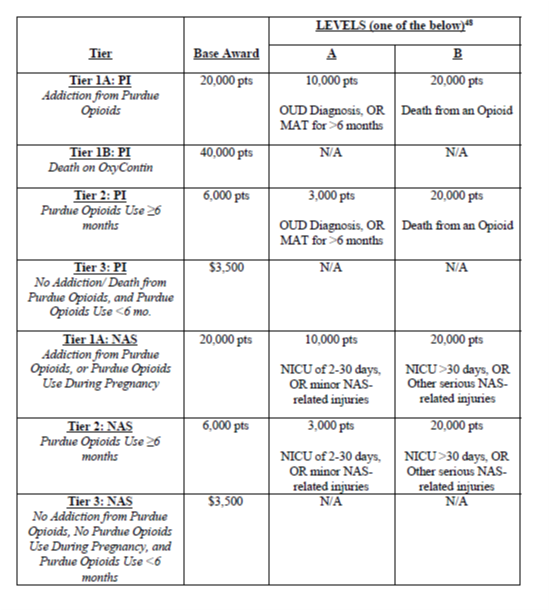 Purdue filed its plan last night, following assurances from debtor counsel at a 1 March hearing that there would definitely be a plan on file on 15 March. At that hearing Judge Drain extended the company’s exclusive period to file a plan from 1 March to 15 March.