The NAS Children ad hoc committee said that the amended disclosure statement fails to set out specific eligibility or qualifications for any NAS child to obtain a distribution on account of a filed proof of claim. Purdue’s plan appears to leave NAS children largely ineligible for payments from a USD 750m personal injury trust that would be created under its plan, and the disclosure statement should be crystal clear on that point before soliciting creditor votes, according to the objection.

Purdue’s plan would leave NAS Children with a recovery equal to only 0.7% of the USD 750m distributed to adult personal injury claimants through the trust, according to the NAS Children ad hoc committee’s objection.

The NAS Children group further argued that the plan was patently unconfirmable because it improperly lumped in very different classes of personal injury claimants and set up trust distribution procedures, which benefited one group over the other. The NAS Children have different legal arguments and theories of recovery than adult claimants – for example, their claims are not subject to legal defenses of comparative fault or contributory negligence, according to the objection. But despite their relatively strong litigation position, Purdue’s trust distribution procedures are “heavily and unfairly weighted in favor of adult personal injury claimants, to the detriment of the NAS Children,” according to the objection.

Purdue also received an objection from the ad hoc committee on accountability, which recently drew a rebuke from the judge overseeing the case, Judge Robert Drain of the US Bankruptcy Court for the Southern District of New York. At a recent hearing, Judge Drain told the ad hoc committee on accountability to “clean up” its act after it filed an objection that included inflammatory statements and creative diagrams that purported to illustrate “billionaire bias” in bankruptcy proceedings.

The ad hoc committee’s disclosure statement objection did not heed Judge Drain’s warning about toning down its inflammatory statements, and it slammed Purdue’s Chapter 11 plan for creating a successor company that “will be able to cause deaths and injuries with impunity” through its continued sale of opioids. The ad hoc committee argued that Purdue should update its disclosure statement to include “its best available data, estimates, and projections” about how many people will develop opioid addictions, overdose, or die from opioid use in the next five years.

“The central goal of Purdue’s Plan is to keep the OxyContin business alive,” the ad hoc committee on accountability wrote. “For some creditors, a crucial factor in assessing the Plan is whether continuing Purdue’s business will cause more people to become addicted to opioids, overdose, and die. Purdue should revise its Disclosure Statement to include a detailed, up-to-date, honest answer to this question.”

The ad hoc committee also sought the publication of the names of Purdue employees responsible for the crimes for which the company pled guilty in October 2020, more detailed disclosure of the wealth held by the Sackler family that owns Purdue, and a clearer disclosure about Purdue’s intent to disallow opioid addiction claims from people who cannot show they were prescribed a Purdue product.

In addition to making clearer that personal injury victims can only receive any recovery if they “show that they or their injured family member(s) were prescribed and used a Purdue opioid,” Purdue’s disclosure statement should include an estimate of “how many people who filed claims will get nothing under the plan,” according to the ad hoc committee’s objection.

“Whether the Plan will leave tens of thousands of people with no recovery is a material fact for creditors to assess whether the Plan deserves support,” the ad hoc committee wrote.

The ad hoc committee also sought publication of the “current amount, location, and liquidity of the wealth of the Sackler family members” who will receive releases under the plan. A recent congressional investigation reported that the Sacklers have at least USD 11bn in wealth, and that information would be relevant to creditors who are asked to evaluate a plan premised on a USD 4.5bn settlement between Purdue and the Sacklers, according to the objection.

Purdue’s amended disclosure statement includes additional detail about its plan and its finances, adding a valuation analysis that puts the company’s value at USD 1.8bn, a liquidation analysis, and cash flow projections for a successor company that will be dedicated to opioid abatement.

Purdue has filed a disclosure statement and reorganization plan centered on the contribution of USD 4.5bn from the Sackler family and the dissolution of the company, with future non-opioid businesses owned by two opioid abatement trusts. The company estimates that a total of USD 5bn in value would be provided to the trusts, with USD 4bn earmarked for non-federal governmental claims.

The pharmaceutical company is scheduled to seek approval of its disclosure statement at a 4 May hearing, and the disclosure statement has drawn objections from several parties, including the state of West Virginia, the office of the US Trustee, the Cherokee Nation, and city governments and tribal organizations, saying that it lacks sufficient information for creditors to make an informed vote on the Chapter 11 plan. The objections have focused on the lack of information about Purdue’s allocation of opioid abatement funds between states and municipalities; the USD 4.25bn settlement between Purdue and its owners, the Sackler family; and the distribution rules and leadership for the various opioid trusts set up by the plan. 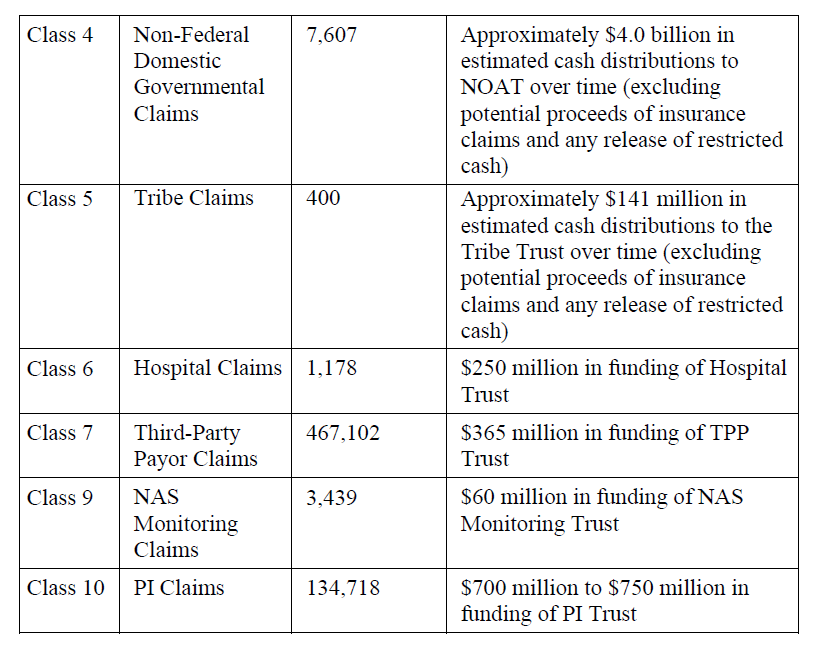