In Phillips’ motion, filed 12 April, the former officer argues that his defense costs as a named party in the lawsuit fall under the insurance policy’s definition of “loss” and that he should get stay relief to make a claim. The objection, filed yesterday, contends that allowing Phillips to claim proceeds under the policy would “dissipate property of the Debtors’ estates”. It further argues that the policy’s intent is reimbursement for losses of the NRA, not for indemnification liability to officers and directors. That means, it continues, that any disbursements to Phillips under the policy’s USD 2m cap would come at a dollar-for-dollar cost to the organization.

The objection also notes that the debtors believe they might have potential claims against Phillips for amounts “improperly billed to, charged to, or obtained from the NRA”. That, in turn, questions whether any claim would be covered under the D&O.

Phillips’ time as the NRA’s CFO has been a repeated subject in the still-running trial over the potential dismissal of the gun rights organization’s bankruptcy case, which will continue this week. His tenure ended in 2018, amid a policy shake-up concerning internal controls related to expenses. Last week, the NRA’s budget and financial analysis director Michael Erstling testified that Phillips was one of multiple individuals within the organization that allowed those controls and policies’ circumvention prior to his departure. Erstling added that the replacement CFO, Craig Spray drove a “culture change”. Spray himself testified earlier in the trial that Phillips’ practices including auditing a “sampling” of expenses, rather than all of them. Spray left the NRA in January 2021 – the terms under which he did are disputed.

The NRA filed for Chapter 11 protection in January, reporting approximately USD 203m in assets and USD 153m in liabilities. The organization said it intended to restructure as a Texas non-profit organization and leave what it calls a “hostile” regulatory environment in New York. 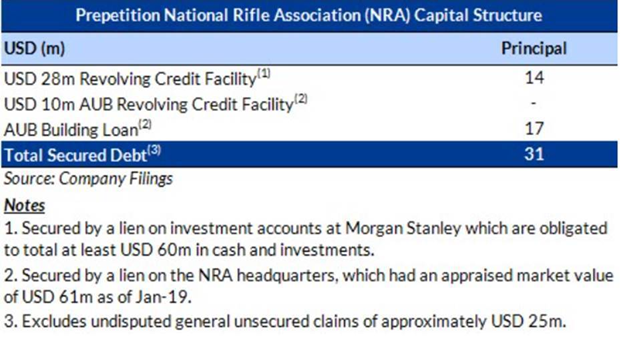