Mallinckrodt plc and shareholders who hope to be appointed as an official committee in the drug maker’s Chapter 11 cases presented rival opinions this afternoon (15 December) of Mallinckrodt’s value, and whether there’s enough to provide a recovery to equity.

Judge John Dorsey of the US Bankruptcy Court for the District of Delaware presided over an all-day hearing today on a motion for the appointment of an official equity committee, which was lodged by an ad hoc group of equity holders who want a formal seat at the table as Mallinckrodt looks to build further consensus on its restructuring support agreement (RSA).

An early portion today’s proceedings included short opening statements from the lawyers for the ad hoc equity group and Mallinckrodt, as well as testimony from Stephen Welch, the chief transformation officer at co-debtor Mallinckrodt Pharmaceuticals. This afternoon, Judge Dorsey heard testimony from two additional witnesses who discussed valuation: William Jeffers of the Griffing Group, a valuation expert brought in by the equity committee, and Brendan Hayes of Guggenheim Partners, the investment banker for Mallinckrodt.

Testifying for the ad hoc equity group, Jeffers presented an analysis he performed based on Mallinckrodt’s public filings with the Securities and Exchange Commission, among other limited information gleaned from the company’s Chapter 11 proceedings. Jeffers’ valuation relied on a few key assumptions, a major one being that Mallinckrodt would be able to shed much of its opioid-related litigation liability through a spinoff of its specialty generics business, while reorganizing around the company’s specialty branded medications business.

Assuming that hypothetical spinoff of the generics business took place, Jeffers testified that the reorganized specialty brands business would be worth some USD 989m—even when accounting for more than USD 5bn in funded debt obligations. Jeffers added that, in his view, that segment of Mallinckrodt’s business could actually be worth even more, pointing to tax benefits that he could not include in his valuation because he was relying solely on publicly available information.

Jeffers faced cross-examination from Christopher Harris of Latham & Watkins, a lawyer for Mallinckrodt, who focused his questioning on certain assumptions in the valuation analysis and Jeffers’ past experience performing these kinds of analyses in the context of a bankruptcy proceeding. Jeffers admitted that he, personally, had not done much valuation work related to companies in the midst of, or approaching a Chapter 11 case. He also noted that a projected growth rate that he relied on to value the specialty brands business at USD 989m, of 2.5% annually for a five-year period, was an assumption rather than something based on information from Mallinckrodt’s past financial results.

Harris continued along a similar theme of questioning when Mallinckrodt’s chosen valuation expert, Hayes of Guggenheim, began his testimony. Hayes pointed to the trading levels on what Mallinckrodt believes to be the fulcrum security in its restructuring efforts, USD 1.5bn in guaranteed unsecured notes. With those bonds trading at less than half of par value, Hayes said that indicated to him that the broader market must believe that Mallinckrodt’s liabilities outweigh its assets. (The unsecured guaranteed notes with the closest maturity date, USD 610.3m of 5.75% notes due 2022, traded on 7 December at 30, according to MarketAxess.)

After reviewing the bond trading levels and other Chapter 11 cases involving publicly traded companies, Hayes said, “I believe there’s not a reasonable likelihood” that Mallinckrodt equity holders would be in line for a recovery. 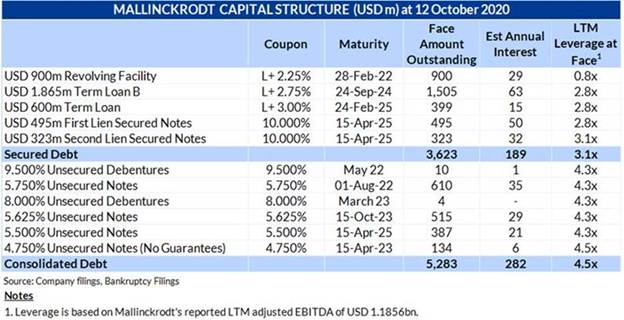 Mallinckrodt filed for Chapter 11 on 12 October with about USD 5.3bn in overall debt. The company, which faces thousands of lawsuits over its opioid and Acthar gel products, negotiated an RSA before the bankruptcy. Holders of 84% of Mallinckrodt’s USD 1.66bn in unsecured notes have signed onto the RSA, as have 50 US states and territories who have alleged the company helped fuel the US opioid addiction epidemic, and an executive committee representing thousands of plaintiffs in opioid multidistrict litigation.

Through the RSA, Mallinckrodt would provide warrants for 19.99% of its reorganized equity and pay USD 1.6bn over seven years into trusts that would be established for opioid claimants. Mallinckrodt has also entered a settlement in principle to resolve allegations that it failed to pay hundreds of millions of dollars in rebates to Medicaid for its Acthar gel steroid medication, agreeing to pay USD 260m over a seven-year period pursuant to a bankruptcy plan. The RSA also calls for the reinstatement of USD 3.7bn in first and second lien debt and the exchange of USD 1.66bn in unsecured notes for USD 375m in new second lien notes and 100% of Mallinckrodt’s equity, subject to dilution. Holders of general unsecured claims would receive USD 150m in cash on account of their claims under the RSA. 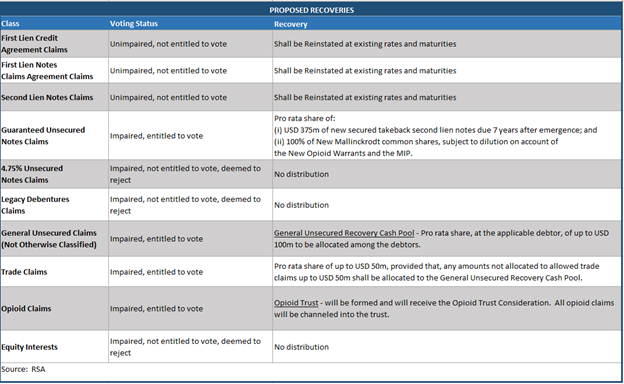