Judge John Dorsey of the US Bankruptcy Court for the District of Delaware found that the ad hoc committee of equity holders failed to prove that the stock could receive a meaningful recovery from the Chapter 11 cases, and that they are unable to have adequate representation in the case without the official committee.

Judge Dorsey agreed with arguments made by counsel for the debtors that the ad hoc committee relied on a flawed valuation, and that due to opiate and other product-related litigation, the company is hopelessly insolvent.

The judge also heard arguments on the motion filed by Deutsche Bank AG New York Branch, as administrative agent for the company’s first lien term loan, which requested limited stay relief allowing it to serve a notice of the accrual of postpetition interest. He denied it without prejudice for Deutsche Bank to raise the argument at a later time in the case, when the judge could hear and determine both the ability to have the stay lifted, and whether or not there was in fact, a default.  Both parties agreed that this issue would most likely come up during a plan confirmation process.

Mallinckrodt, which faces thousands of lawsuits over its opioid and Acthar gel steroid products, filed for Chapter 11 on 12 October with about USD 5.3bn in overall debt.  The company negotiated an RSA before the bankruptcy with holders of 84% of Mallinckrodt’s USD 1.66bn in unsecured notes, as well as 50 US states and territories who allege the company helped fuel the US opioid addiction epidemic, and an executive committee representing thousands of plaintiffs in opioid-related multidistrict litigation. 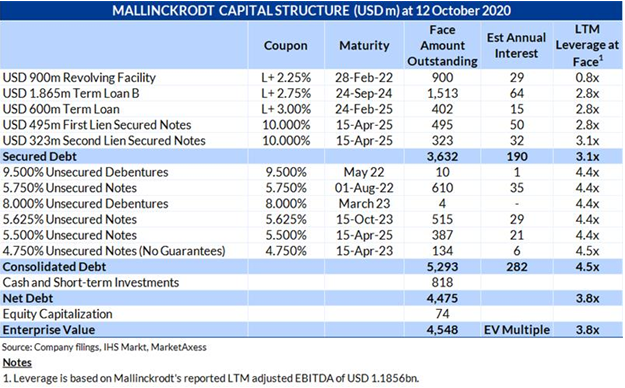