Highland Capital Management Fund Advisors and NexPoint Advisors filed the notice of appeal two days after filing a motion seeking a stay of the plan confirmation order during the appeal process.

Judge Stacey Jernigan of the US Bankruptcy Court for the Northern District of Texas agreed to confirm the plan during a hearing on 8 February, and finally entered the confirmation order on the docket on 22 February. The plan opponents argued that the plan needed to be re-solicited because estimated recoveries for general unsecured creditors dropped to 62.14% from 85.31%. They also took issue with release and injunction provisions under the plan.

The debtor’s plan calls for the liquidation and wind-down of Highland’s collateralized loan obligation (CLO) funds over the course of two years, with proceeds going into a claimant trust that would then make distributions to unsecured creditors. Highland also intends to create a litigation “sub-trust” through the plan that will pursue causes of action. Highland’s plan sets aside a USD 13.15m cash pool that will provide recoveries to holders of small “convenience” claims. General unsecured creditors could receive a distribution from the convenience claim pool if they agree to reduce the size of their claim to USD 1m, while convenience claimholders can elect to get GUC treatment. Subordinated claims will get a pro rata share of subordinated claimant trust interests.

A secured claim held by Jefferies LLC will be paid in cash, while Frontier State Bank’s secured claim of USD 7.9m will get cash on its unpaid interest, as well as a new promissory note. Other secured claims will get cash, the collateral securing their claims, or other treatment rendering them unimpaired.

Holders of Class B/C limited partnership interests will get a pro rata share of the contingent claimant trust interests. Class A interest holders, in a class of their own that is lower on the creditor waterfall, will get the same treatment. 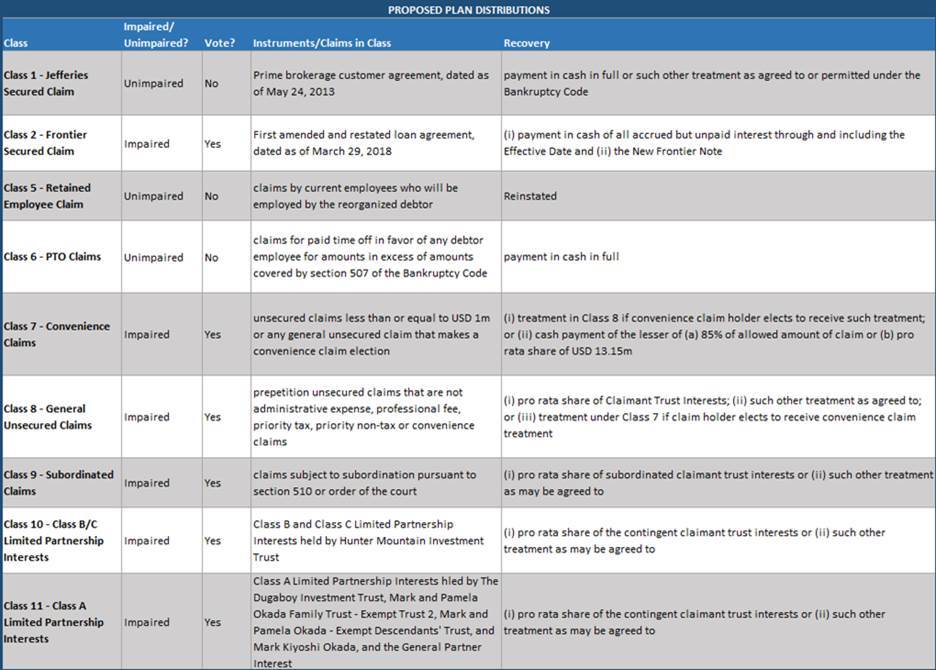 During Judge Jernigan’s confirmation ruling, she questioned the good faith of the objectors. She said she has good reason to feel that they opposed the plan in order to be “disrupters,” instead of objecting to defend the rights of creditors under the plan. While the judge said it’s understandable that Dondero didn’t want to lose Highland, it's not a sufficient reason to oppose the plan.

The judge has called out Dondero multiple times for wasting hours on unnecessary disputes, recently saying he and his funds appear to be playing “sickening games.” Judge Jernigan said it appears Dondero doesn’t want there to be any money left for creditors after legal fees are paid. The judge suggested that if Dondero’s activities continue to drive up fees, she might one day enter an “enormous attorney fee shifting order,” suggesting that Dondero and his affiliates would be taking on some of that cost. Judge Jernigan said she’d have to find that they acted in bad faith to do that, but she wouldn’t be surprised if that’s where she ends up.

In the motion seeking a stay pending resolution of the plan appeal, Dondero’s entities said there is a threat of equitable mootness if the plan is consummated before they have a chance to see through the appeal process.

But they said there is a “more immediate threat” as well. If the movants can’t exercise their rights and fulfill their fiduciary obligations to the investment funds they manage because of the plan’s gatekeeper injunction, those rights will be weakened by the time of any final resolution of the appeal, they argued.

The appellants argue that a stay of the plan order pending appeal wouldn’t hurt the debtor or its creditors because the plan doesn’t give the debtor the ability to manage its assets any better than it currently does.

Dondero’s entities said the debtor will continue doing what it is doing today, through a different corporate form, but it will not receive any new money, exit financing, or other assets under the plan. While the absence of a stay pending appeal could “irreparably harm the legitimate interests of the movants,” no interest of the debtor will be harmed if the stay is granted, according to the stay motion.

The movants also said that they have a likelihood of success on the merits of their appeal, which deals with the absolute priority rule, satisfaction of section 1129 of the Bankruptcy Code, and the confirmed plan’s exculpation and injunction provisions.

While the court overruled the movants’ objections to the plan on these bases, they said, an objective analysis of the issues shows that they are subject to material dispute. The public interest supports a stay because the movants, those whose money the debtor manages, and the public at large all have a strong interest in ensuring that the debtor complies with its contractual, fiduciary, and statutory obligations to its investors, according to the stay motion.

Highland filed for Chapter 11 protection in October 2019, shortly before it was due in Delaware Chancery Court for a hearing related to a USD 189m arbitration award against the fund. The filing also came about two weeks after co-founder Mark Okada announced his retirement.