Garrett Motion’s bankruptcy judge told the debtor and related parties to shift their evidentiary focus as he weighs motions to approve the company’s entry into a plan support agreement (PSA) or terminate its exclusivity periods.

Judge Michael Wiles of the US Bankruptcy Court for the Southern District of New York never got into those motions, which were set to make up the agenda for today's hearing. Instead, he probed counsel for the debtor, the official equity committee and Centerbridge Partners, Oaktree Capital Management and former parent Honeywell International (COH group) over how the parties got to this state and whether the debtor’s plan is fair to all shareholders. 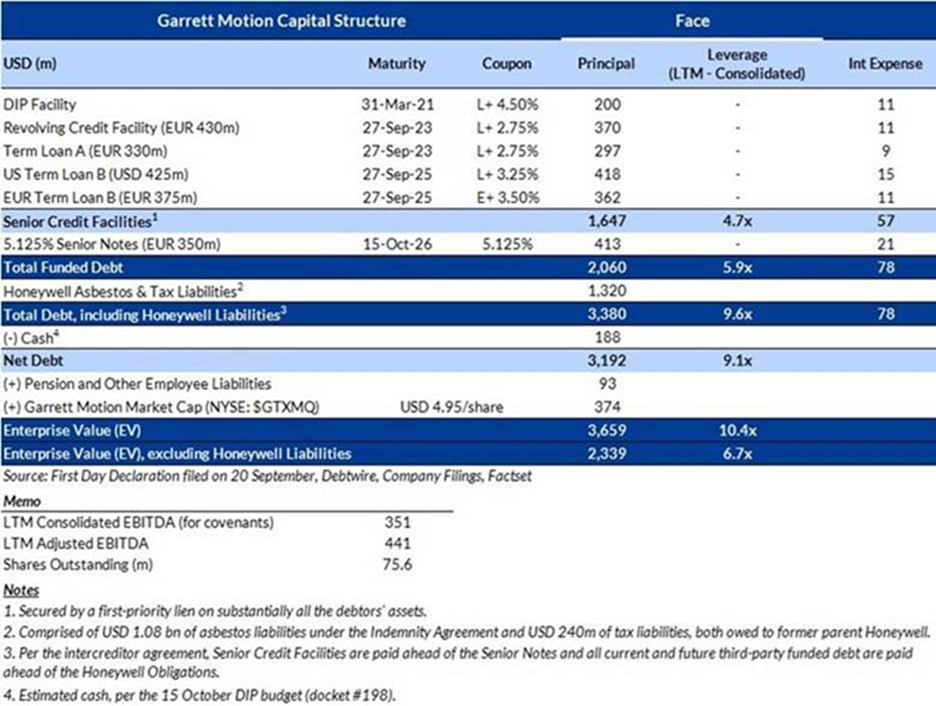 "I think the parties are prepared to put on evidence mostly about differences and economic comparisons between the two proposals," the judge said. "To some extent, I regard that as less relevant as to what I need to decide today."

The judge called for a break and told the parties to return to court at 2:30pm ET to decide how to proceed and told them to consider entering mediation to resolve the dispute.

The COH plan settles the company’s long-running dispute with Honeywell, pays all other creditors in full, provides Garrett with a USD 1.05bn equity investment and USD 200m rights offering, and gives shareholders the right to cash out at USD 6.25 per share. Honeywell had asserted a USD 1.8bn claim in the case over an indemnity contract the parties entered into as part of Honeywell’s 2018 spinoff of Garrett, which purported to reimburse Honeywell for legacy asbestos exposure. Honeywell agreed to accept USD 375m in cash, Series B preferred stock payments of USD 35m in 2022 and USD 100m annually from 2023 to 2030, with Garrett having the option to prepay the Series B preferred stock at any time at a call price equivalent to USD 584m.

The equity committee plan is centered on an USD 800m equity commitment backstopped by Atlantic Park and a commitment for USD 1.5bn in loans and USD 350m revolver from Credit Suisse. Most importantly for shareholders, common stockholders would either be unimpaired or have the option to cash out at USD 7 per share.

The key difference, the equity committee claims, is the differing treatment for shareholders. The equity committee’s plan would have a 25% equity backstop for Atlantic Park and leave the rest for current shareholders, while the COH deal would leave just 6.7% of Garrett’s equity available to non-COH shareholders after dilution if they choose not to cash out. If exclusivity is terminated, the equity group would be able to solicit votes for its own plan at the same time Garrett pursues the COH plan.

Judge Wiles said he has been concerned in other bankruptcy cases that large entities, like the COH group, can use their position to get too big a piece of the pie compared to creditors not on board with the deal. In this situation, the judge said he needs evidence to decide.

“I don’t know and will not decide until I hear evidence whether I should be concerned about allocations under the proposal.”

The case has had many twists and turns since Garrett filed for Chapter 11 in September 2020. Earlier in the case, the COH group found itself sitting where the equity group is now, looking to terminate exclusivity to file its own plan. Judge Wiles shot down that request in December, and Garrett decided to move forward with a USD 2.9bn bid for its assets from KPS Capital Partners following the completion of an auction on 5 January. But shortly after picking the KPS bid, the company abandoned the offer and pivoted to the current bid from the COH group.

Central to the testimony he needs, the judge said today, is what exactly changed from when the debtor was fighting off the COH group in the fall to choosing its bid early this year.

“I want the debtors to explain whether as a business matter, they just decided that it wasn’t worth the fight,” the judge said.

by Pat Holohan and Taylor Harrison