Chesapeake Energy Corporation today kicked off what is expected to be a lengthy plan confirmation trial with opposition to the proposed plan coming from the unsecured creditors committee (UCC), which argues that the plan is based on an improperly low valuation. During oral arguments today, debtor counsel insisted that the committee’s take is “fundamentally flawed.”

The UCC, with 10 fact witnesses, claims that the trial should take 12 to 15 days, while the company estimates about six days. Judge David Jones of the US Bankruptcy Court for the Southern District of Texas admitted in court today that he genuinely doesn’t know how long the trial will take at this point. Today the parties presented opening arguments and the evidentiary portion of the trial will begin at 9am CT on Wednesday (16 December).

The oil and gas company’s plan is centered on a debt-for-equity swap of FLLO lender claims for 76% of Chesapeake’s equity, while second lien lenders would take 12% of the equity, the right to participate in a USD 600m rights offering, and warrants for additional equity. Unsecured noteholders would receive 12% of the equity and warrants. Revolver lenders, owed USD 2.3bn, would share in the company’s USD 2.5bn exit financing on a dollar-for-dollar basis. Chesapeake amended its plan last weekend to increase a pool for general unsecured creditor recoveries to USD 10m, from a previously proposed USD 1m.

The UCC has repeatedly spoken out against confirmation and is seeking to pursue fraudulent transfer claims related to the debtors’ December 2019 deleveraging efforts, including the acquisition of WildHorse Resource Development Corp. The UCC argues that the supposed deleveraging actually resulted in USD 3.8bn in new secured debt and benefitted certain creditors at the expense of others.

The UCC, in its latest filing, argued that the plan is based on an “unreasonably low total enterprise valuation [TEV] calculation,” put together during the “valuation nadir” in April and May when oil prices went negative and the coronavirus pandemic painted an uncertain future. The debtor’s latest valuation report puts the TEV at USD 4.2bn, while the UCC argues for USD 7.1bn, claiming that the debtor’s analysis is “materially flawed and predicated on a patchwork of excessively conservative assumptions,” and that the debtor’s true value will be determined as a “size twelve foot that does not fit into a size six shoe.”

During today’s hearing, debtor counsel Patrick Nash, of Kirkland & Ellis, was the first to present opening arguments and began by discussing the 2019 deleveraging transactions that the UCC has called out. He said the committee's position on the transactions amounts to “historical fiction,” as the UCC has created a “parallel universe” where Chesapeake “pursued growth for growth's sake, living on the financial edge at all times.” However, Nash said, in reality the company has made “enormous progress” in reducing its debt load, with interest expenses declining annually.

Nash said the record will show that the 2019 transactions were not the reason for the bankruptcy filing and that the asserted fraudulent transfer claims associated with the transactions are “incoherent and worthless.” Nash said the plan is not the result of a “loan to own” situation, as Chesapeake's board had valuable leverage through potential claims against lenders that it was able to exercise.

Nash asserted that the lenders committed to funding because Chesapeake had a “proverbial gun to their head.” From the debtors’ point of view, unsecured creditors were USD 4bn out of the money but the company was able to extract 12% of equity plus warrants for unsecured noteholders, he said. Nash insisted there is “no question” that the debtors, along with Franklin Advisers, the largest holder of unsecured notes, fought for a meaningful recovery for unsecured creditors.

Nash argued that the UCC's valuation is based on the idea of “ever-increasing commodity prices.” He said their valuation is “fundamentally flawed” and the committee’s valuation was “outcome oriented.”

Nash said the UCC’s standing motion, if granted, would lead to a lengthy delay, resulting in potentially years of litigation. He noted that the company’s lenders have no desire to underwrite a “war of attrition.”

“Our narrative is rooted in fact. The committee narrative is divorced from fact; it is in a parallel universe,” Nash argued.

Attorneys for Franklin and an ad hoc FLLO term loan group backed Nash’s arguments in support of the plan.

UCC counsel Robert Stark, of Brown Rudnick, gave an argument in opposition to plan confirmation, saying that the trial should focus on the actual evidentiary record. “This is not a time for rhetoric. It’s time for evidence and that’s all that really matters at this stage,” he said.

As to Chesapeake’s valuation, Stark said plan valuation, by law, should be based on what the company is worth now, not what it was worth at the time of plan negotiations. During negotiations in the spring, he said, the world was different, especially due to the “onslaught” of a brand-new pandemic. But that is not where we are today, Stark said. While the pandemic rages on, he said, there have been scientific discoveries related to a vaccine that will pave the way for a path forward.

Though the debtors have argued that the market has spoken because there were no competing offers to the plan, Stark said the debtors refused to shop the deal. Further, he said, the plan is really giving the unsecured noteholders about 4% instead of 12% of the equity because what the debtors “give with one hand,” they take back and distribute to others. Stark noted that “enormous” value is being handed to Franklin and the second liens, violating the law, as secured creditors aren’t meant to get equity or other distributions that are valued in excess of their claims. Stark said he is in court to represent smaller creditors that weren’t allowed in the “smoky back room” when the deal outlining the plan was struck.

Aside from valuation, Stark also discussed the claims that the UCC is seeking standing to bring on behalf of the debtors’ estates. Notably, he said, one thing the evidence will show is that the company’s board of directors, unlike most boards in a case of this size, did not commission a litigation report. Stark said usually, in this scenario, there is a report that has been delivered to the board related to the potential claims, but that was not done in Chesapeake’s case.

Stark argued that one of the foundations of the business judgment rule under the Bankruptcy Code is that the company needs to study and understand the things it is making decisions about as part of the plan and overall Chapter 11 case.

Chesapeake filed for Chapter 11 in June armed with a restructuring support agreement (RSA) laying out the debt-for-equity swap contained in the latest plan. 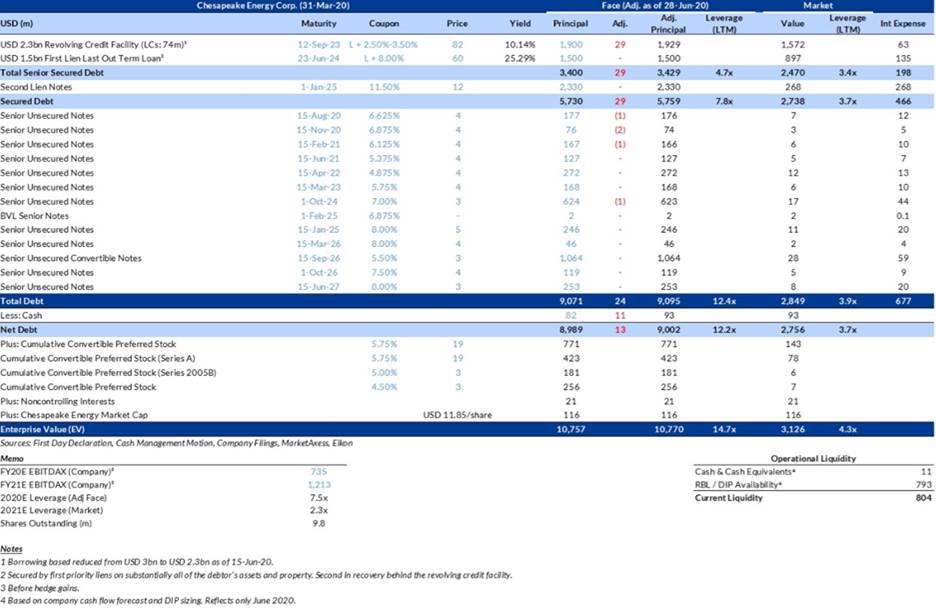