The Boy Scouts of America (BSA), scheduled to seek approval of its disclosure statement next week, faces objections from religious organizations, the Girl Scouts, and the office of the US Trustee, in addition to the large numbers of objections filed by sexual abuse claimants and insurers.

BSA filed an amended Chapter 11 plan and disclosure statement on 14 April, setting up a dual-track plan with options for a global settlement with abuse claimants, insurers, and local BSA councils and charter organizations, as well as a “toggle” option that resolves only the liability of the parent organization. The disclosure statement estimates BSA’s liability for sexual abuse claims at USD 2.4bn to USD 7.14bn, and it estimates that victims will receive a recovery of 8% to 23%, plus additional insurance rights, under the global settlement approach. Under the toggle option, with no resolution for local councils, the sexual abuse victims would receive an estimated recovery of 1% to 4%, plus insurance rights which are of “limited value,” according to the disclosure statement. 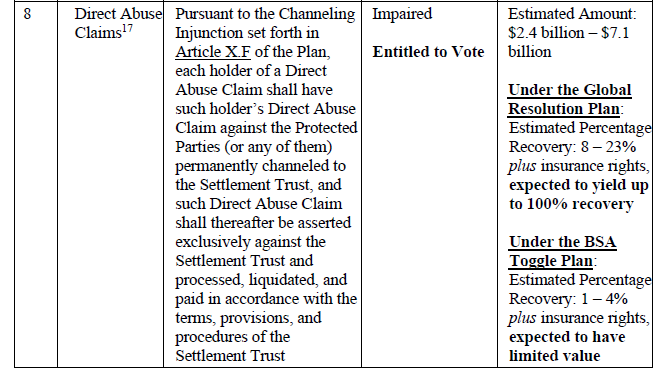 BSA's disclosure statement hearing is scheduled for 19 May. The organization has already been hit with dozens of objections to its Chapter 11 disclosure statement from sexual abuse claimants, with three major sexual abuse constituencies and many individual plaintiffs objecting to the plan’s litigation releases, insurance settlements, and proposed contribution of assets to pay decades’ worth of abuse claims as impermissible. Insurers have also spoken up against the plan and disclosure statement, saying that the Boy Scouts’ proposed plan offers “perverse incentives” that reward plaintiffs’ lawyers for picking up dubious abuse claims en masse, without checking to see if the claims have any merit.

The Church of Jesus Christ of Latter-Day Saints, a United Methodist ad hoc committee, and the Roman Catholic Archbishop of San Francisco have filed objections related to BSA’s proposed treatment of insurance policies that may cover both the Boy Scouts organization and the churches and other chartered organizations who have partnered with BSA on scouting programs.

The Methodist group, which includes churches that are potential contributing partners, also says that it does not know how the settlement contribution will work.

The lengthiest church objection was filed by the Church of Jesus Christ of Latter-day Saints, and it focused on BSA’s treatment of insurance policies and proceeds. BSA’s plan attempts to make unilateral decisions on jointly held insurance coverage without consulting its partners, and also attempts to renege on indemnification agreements under which it agreed to protect them from scouting-related liability, according to the Church.

“The collective impact of these terms of the Plan amounts to a brazen attempt to eradicate any ability for the Church and other chartered organizations to collect on their insurance rights and allowable claims against the estates,” the Church wrote.

The US Trustee, in addition to echoing concerns raised by other parties, objected to the “channeling injunction” that would force all abuse claims to seek recovery solely from a settlement trust established by the plan. While the channeling injunction is structurally similar to mechanisms used in Chapter 11 cases involving product liability claims, it is a “novel” feature of a sexual abuse tort case and BSA has made little attempt to make a case for the legality and enforceability of the channeling injunction, according to the US Trustee. Without more information on the legal theory for the channeling injunction, which appears to override the Bankruptcy Code’s limitations on non-consensual third-party releases, the disclosure statement should not be approved, according to the objection. The plan’s releases and exculpation provisions, in general, are overly broad, according to the US Trustee, and they improperly seek to enjoin claims for future misconduct as well as claims against persons who are not fiduciaries in the Chapter 11 case.

The US Trustee also opposed some of the plan’s treatment of abuse claims for voting purposes, such as the inclusion of an “expedited distribution” option of USD 1,500 for abuse claimants who vote in favor of the plan. Echoing concerns raised by insurers, the US Trustee argued that the “expedited distribution” option allows for claimants to be paid without any review of the merits of their claims, which “may leave the Trust vulnerable to the payment of meritless or fraudulent claims” and reduce the funds available for other claimants. The disclosure statement should be amended to explain any risk mitigation efforts tied to that provision, and it should not condition a claimants’ eligibility for that expedited payment option on their decision to vote in favor of the plan, according to the US Trustee’s objection.

“For purposes of the Disclosure Statement, this provision is also troubling because it appears to offer claimants an improper inducement to vote in favor of the Plan,” the US Trustee wrote.

The US Trustee also pointed out several areas where it believes BSA’s disclosure statement lacks sufficient information for creditors, including the proposed USD 425m plan contribution from local councils and chartered organizations. Like insurers, sexual abuse claimants, and churches, the US Trustee pointed out that the plan includes “no disclosure of a single actual commitment” from those parties and does not contain “any discussion as to how BSA will fulfill this commitment.”

The disclosure statement asserts that non-abuse litigation claimants will receive 100% recovery on their claims, based on available insurance coverage, but the Girl Scouts say that the Boy Scouts' insurance will not cover the profits disgorgement claim and that the Boy Scouts’ excessive legal spending will erode or eliminate the coverage for repayment of the Girls Scouts’ attorneys’ fees. Those limitations make it likely that the Girl Scouts’ claim will receive less favorable treatment than all similarly situated litigants, according to the objection.

“In short, Boy Scouts have structured a Plan that purports to treat all non-abuse litigants similarly but in reality singles out and punishes Girl Scouts by providing far worse treatment,” the Girl Scouts wrote. “This dynamic is not adequately disclosed in the Disclosure Statement and, even if it were, the Plan cannot be confirmed insofar as it affords Girl Scouts’ claims disparate treatment.”

Other litigation and settlement objections

The sexual abuse claimants, like the Girl Scouts, have also raised more limited objections about the alleged unequal treatment of litigation claimants.

In addition to their broader objections to the disclosure statement as a whole, the Tort Claimants Committee (TCC) and Coalition of Abused Scouts for Justice have filed recent objections opposing a proposed USD 3m settlement of a personal injury lawsuit, saying that it “represents favorable treatment of non-abuse claimants over abuse survivor claimants.”

The Boy Scouts have sought approval of the payment to an adult scout leader who was injured during a “Leap of Faith” activity at the Summit Bechtel Reserve in West Virginia, and a partial lifting of the bankruptcy court’s automatic stay to allow Old Republic Insurance Company to pay the settlement amount under its 2018-2019 insurance policies.