Sundance Energy has filed for Chapter 11 with a prepackaged plan of reorganization setting up a debt-for-equity swap on a 45-day timeline.

The company’s prepetition term loan lenders are funding the case with USD 50m in debtor-in-possession (DIP) financing. The DIP lenders would receive 38.04% of reorganized Sundance’s equity, with the remaining 61.97% going to term loan lenders, owed USD 253m. Lenders on the company’s RBL, owed USD 146.95m, would share a USD 107.5m exit RBL, USD 30m second-out term loan exit facility and a cash paydown if they vote to accept the plan. Unsecured creditors would be unimpaired and paid in full in the ordinary course of business.

The debtor would fund its post-bankruptcy operations with the exit RBL, second-out term loan and third-out term loan, the amount of which is still to be determined. The plan sets a series of milestones for the case, requiring the company to confirm a plan by 23 April.

Judge David Jones of the US Bankruptcy Court for the Southern District of Texas has scheduled a first day hearing to consider the DIP and other operational motions for this afternoon at 2pm CT.

Today, the company has a 42,430 total net acre position, with 38,622 of those acres in Texas’ Live Oak, Atascosa, La Salle and McMullen counties. Sundance has working interests in 228 wells and non-operating working interests in another 52 wells. For the nine months ended 30 September 2020, Sundance had an average net daily production of 9,263 barrels of oil equivalent with total revenues of

Sundance has 57 employees at its corporate headquarters in Denver, Colorado, and a field office in Tilden, Texas. 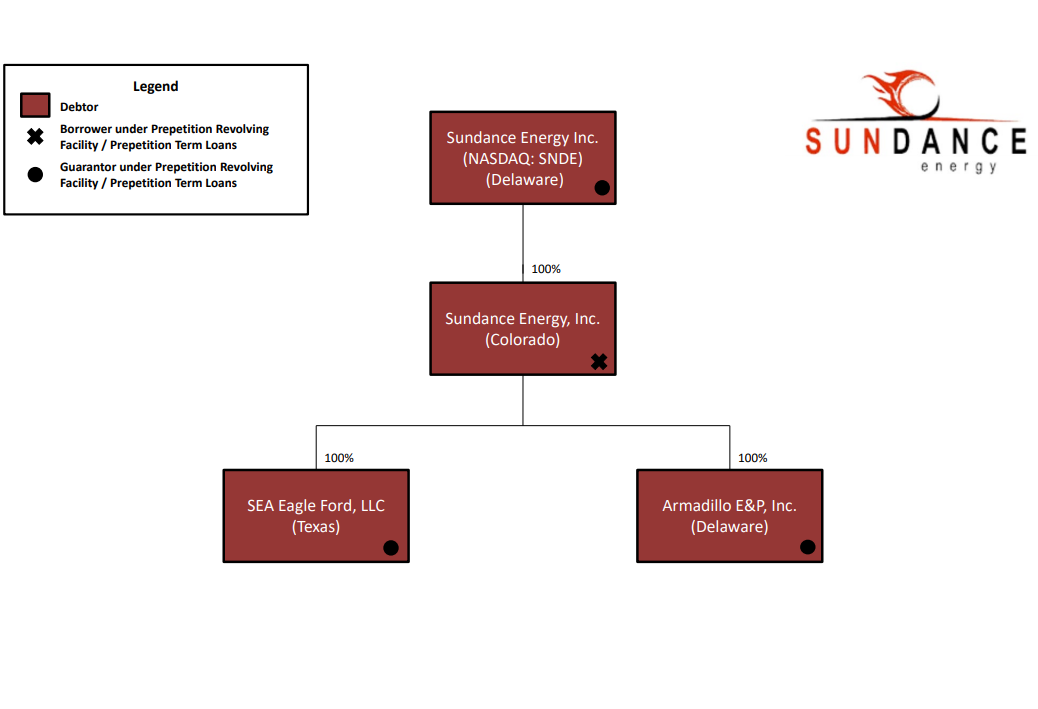 Sundance enters Chapter 11 owing USD 146.95m on an RBL due October 2022 with Natixis as agent and USD 253m on a term loan due April 2023 with Morgan Stanley Capital Administrators as agent.

The company owes USD 30.21m to unsecured trade creditors. It also has a USD 1.9m loan under the Paycheck Protection Program that it anticipates will be forgiven. 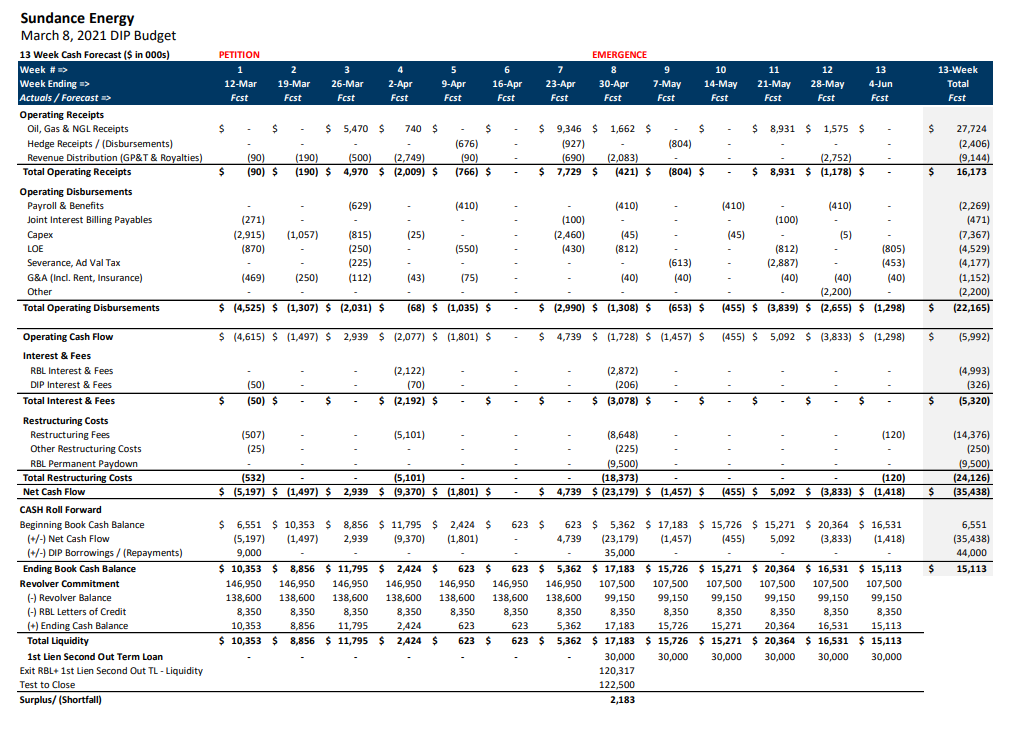 Like “many other” oil and gas companies, Sundance has been hit with “numerous challenges” in recent years, including the coronavirus pandemic and the steep drop in oil and gas prices amid a price war, Chief Financial Officer Cathy Anderson said in her first-day declaration.

The borrowing base on its RBL was decreased from USD 210m to USD 170m in June 2020. For the first nine months of 2020, the company’s EBITDAX was down to USD 63.27m from USD 98.06m in that period in 2019 and by September 2020, Sundance was out of compliance with certain financial covenants on its credit facilities.

Sundance attempted to regroup, renegotiating pricing with vendors and cutting its workforce and salaries, but ultimately decided a larger restructuring was necessary. In May 2020, the company brought on Miller Buckfire and affiliate Stifel Nicolaus and reached out to more than 70 parties for a restructuring or sale, entering into 31 non-disclosure agreements and setting a 24 September deadline for best and final bids. Sundance did receive four non-binding final bids, but all were “well below” the principal amount of its term loans.

In October 2020, Sundance brought on Latham & Watkins as legal counsel and FTI Consulting as financial advisor to continue pursue a standalone restructuring before entering into an RBL amendment that required it to pursue a dual-track sale and restructuring process. In December 2020, Miller Buckfire again solicited bids, this time securing three non-binding final bids that were, again, insufficient to cover Sundance’s funded debt.

Negotiations between the debtor and the lenders yielded a restructuring support agreement on 9 March, leading to Sundance filing for Chapter 11 later that day with a prepackaged plan.

The DIP and the plan

The company’s prepetition term loan lenders are funding the case with USD 50m in debtor-in-possession (DIP) financing. The DIP lenders would receive 38.04% of reorganized Sundance’s equity.

Unsecured creditors would be unimpaired and paid in full in the ordinary course of business. 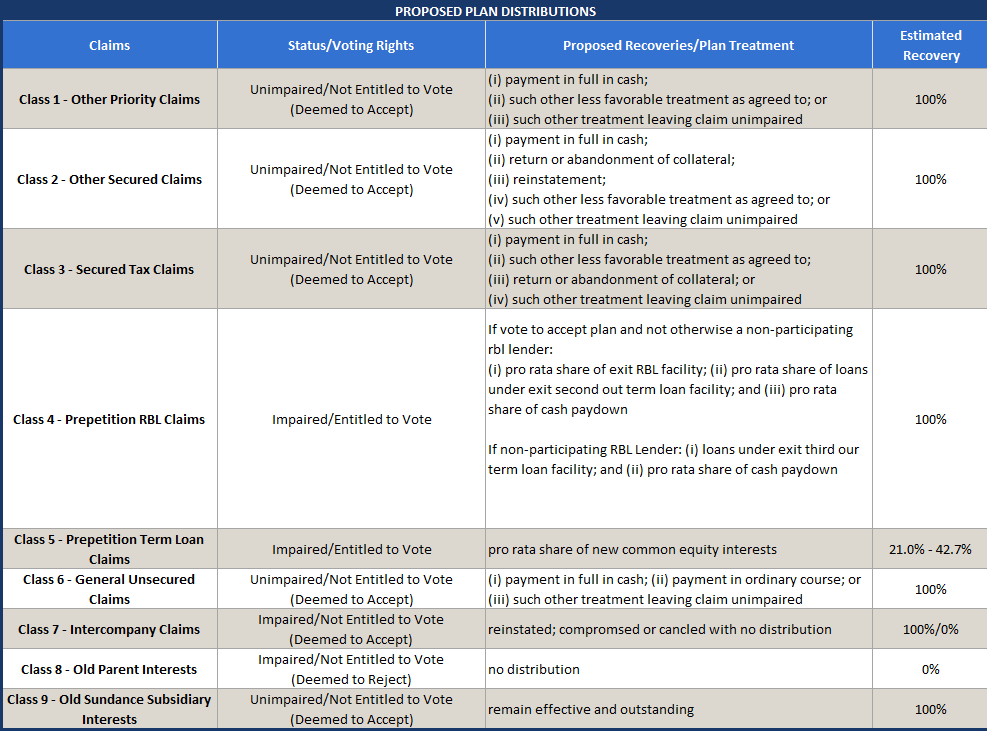 The plan sets a series of milestones for the case, requiring the company to obtain plan confirmation by 23 April. Sundance is asking the court for a 19 April confirmation hearing.

The case is In re: Sundance Energy Inc, number 21-30882, in the US Bankruptcy Court for the Southern District of Texas.