CiCis yesterday filed for Chapter 11 with a prepackaged plan of reorganization that sets up a debt-for-equity swap with its secured lender on a proposed 60-day timeline.

The buffet pizza chain generates 86% of its sales from in-store dining and, as a result, has struggled during the coronavirus pandemic, which “severely strained” its finances. CiCis was working on a sale of its assets before its lender sold its debt in December to D&G Investors, which the company said was immediately interested in acquiring Cicis. The parties will now seek confirmation of a plan that would equitize the D&G USD 81.64m loan, while giving unsecured creditors USD 50,000 to share.

D&G has agreed to back the case with USD 9m in debtor-in-possession (DIP) financing and has the option under the plan to roll some amount of the DIP and its prepetition debt into an exit facility. Judge Stacey Jernigan of the US Bankruptcy Court for the Northern District of Texas has scheduled a first day hearing for Wednesday, 27 January at 10:30am ET.

CiCis is an owner, operator and franchisor of “family-oriented unlimited” pizza restaurants, with 318 locations in 26 states at the petition date. The company franchises the vast majority of its restaurants, with 128 companies franchising 307 locations.

Founded in 1985, the company has gone through several ownership changes since its inception. Levine Leichtman Capital Partners bought Cicis in 2003; ONCAP Management Partners purchased it from Leichtman in 2007; and in 2016 Arlon Food and Agriculture Partners II LP bought it from ONCAP.

The company hit its peak store load in 2009 with 650 restaurants, dropping to 430 by 2016. Since its 2016 acquisition by Arlon and Agriculture Partners, the company has worked to shift all restaurants to the franchise model and today owns only 11 locations.

CiCis entered bankruptcy with USD 81.64m in funded debt, consisting of USD 9.99m on a revolver and a USD 71.65m term loan, originally with Wells Fargo as agent but now with Wilmington Trust. The debt was held by a syndicate of banks including Wells Fargo, Bank of America, Citizens Bank, and Cadence Bank before D&G bought the debt on 8 January. 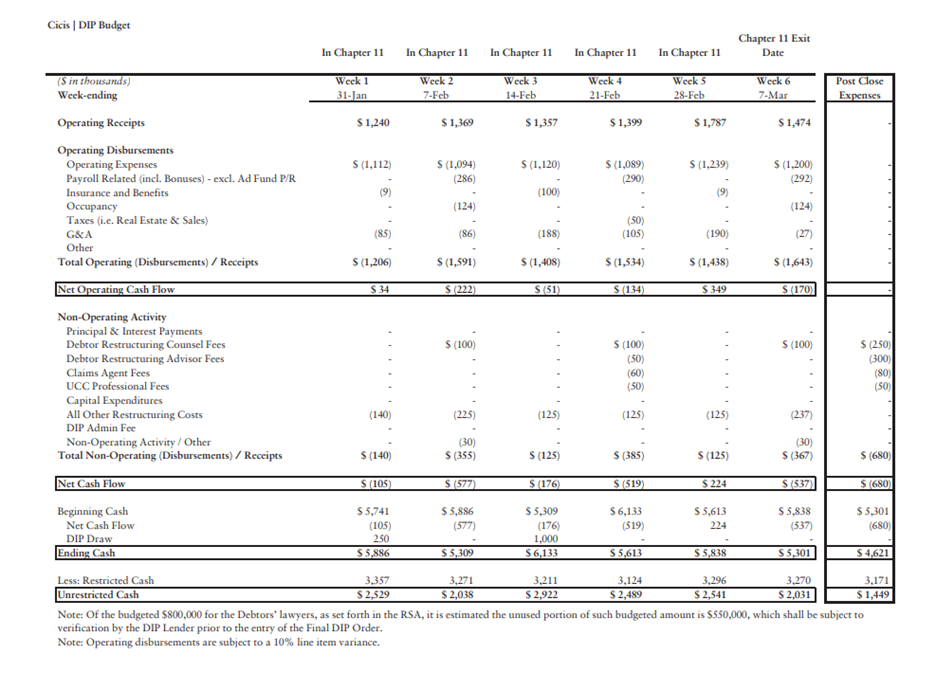 CiCis has been hurt by the “uncertainty, unexpected challenges, and ever-changing landscape” caused by the coronavirus pandemic, resulting in “severely strained” finances, Chief Financial Officer Richard Peabody said in his first day declaration.

The company was attempting to rework its business model even before the pandemic to allow for more flexibility, moving to a fully franchised model and shuttering one of its distribution centers. The pandemic, in early 2020, was a “sudden and significant blow” to its liquidity, the CFO noted. The company reacted to the early days of the pandemic by enhancing its cleaning protocols and implementing social distancing requirements, but in March, stay-at-home orders forced it to temporarily close 203 of its stores. The company also permanently shuttered another 61 restaurants, cut executive pay by 25%, and eliminated 39 corporate employees.

Wells Fargo issued a notice of default on the credit facility on 13 August. CiCis began negotiating with the lenders, but the lender group did not want to take ownership, and CiCis instead launched a sale process, Peabody said. The company retained an independent director on 2 October to explore strategic alternatives and talked with the lenders for months, but negotiations “ultimately stalled over disagreements regarding the lenders’ desires to control the sale process.” In November, the company engaged Piper Sandler’s TRS Advisors division as financial advisor and reached out to 292 potential buyers, obtaining four indications of interest, Peabody said.

But on 15 December, CiCis learned that the lenders had sold their debt to D&G, leaving the company to start “from scratch” on restructuring talks. D&G, unlike the previous lenders, was interested in owning the company but negotiations hit “key roadblocks” and Wilmington Trust, the new agent on the facility, informed the company on 8 January that D&G planned to enforce its remedies, including proxy rights to replace the company’s board.

But before that could happen, the parties reached an agreement for CiCis to reorganize in Chapter 11 with a prepackaged plan that would hand the company’s equity to the lenders. CiCis filed its petition on Monday (25 January).

The DIP and the plan

D&G has agreed to provide a USD 9m DIP, consisting of USD 3m in new money and a roll-up of USD 6m in prepetition debt. 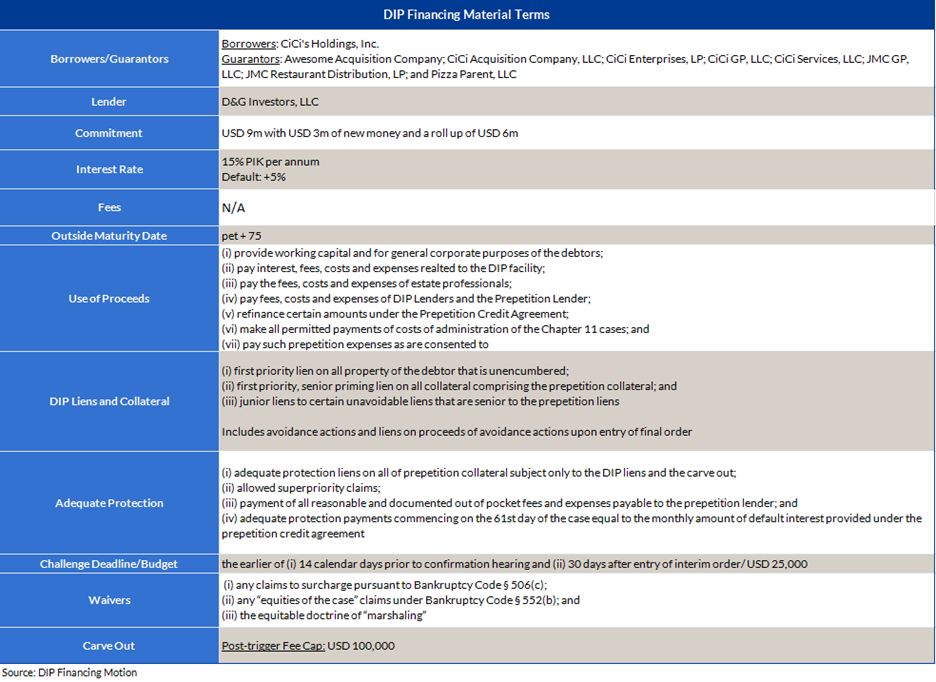 The lender would then take CiCis equity in exchange for the cancellation of its debt. Unsecured creditors would share a cash pool of USD 50,000.

The agreement sets a series of milestones for the case, requiring CiCis to put a plan into effect by 15 March.

The case was In re: CiCi’s Holdings Inc, number 21-30146, in the US Bankruptcy Court for the Northern District of Texas.