CarbonLite Holdings LLC filed for bankruptcy today to undergo a sale process with debtor-in-possession (DIP) financing milestones requiring a sale to close within 75 days of the petition date. The company is armed with four separate DIPs, with the financing being split up between three different debtor groups.

The company, which operates three plastic bottle recycling plants, filed for Chapter 11 in Delaware and will have a first-day hearing on Tuesday (9 March) at 3pm ET, at which time the debtors will seek interim DIP approval.

The Los Angeles-based company operates three plastic bottle recycling plants which are located in California, Texas and Pennsylvania. It was founded by CEO Leon Farahnik in 2011 and remains privately held. CarbonLite is “on the forefront” of processing post-consumer recycled polyethylene terephthalate (rPET) plastic products and producing high-quality rPET and polyethylene terephthalate (PET) beverage and food packaging products through two business segments, according to a first-day declaration filed by CRO Brian Weiss.

Weiss said the company is the largest supplier of rPET in the world and the number one supplier in North America with about 60% of available market capacity. CarbonLite is poised to play a leading role in the growing environmental sustainability movement, Weiss asserted.

CarbonLite has about USD 254m in prepetition funded debt, which includes loans, bonds, and notes. Each of CarbonLite’s three plants has its own capital structure, as sources previously told Debtwire. 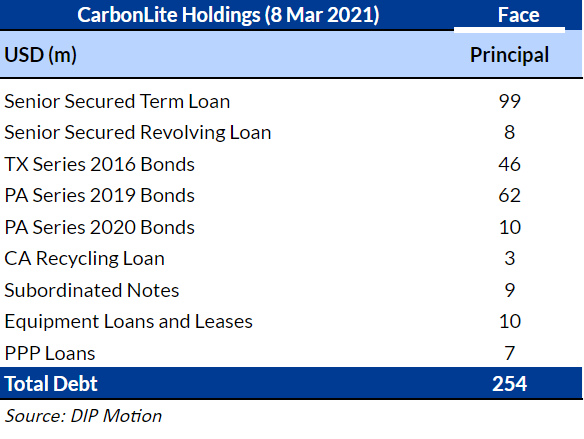 In addition to the funded debt, the debtors estimate that they have about USD 112.7m in general unsecured debt.

Weiss said the need to file for bankruptcy was due to multiple factors, including sub-optimal plant utilization, unfavorable pricing in customer contracts, interest expense on debt obligations, high operating expenses relative to revenue, and increases in hourly minimum wage obligations.

Weiss said historically, the debtors have gotten funding through multiple means, including draws under their credit facilities, the issuance of municipal bonds, notes payable, equity issuances, and advance payments from customers. Additionally, certain debtors provided monetary advances to others.

The debtors’ financial distress intensified in 2020, Weiss said. On 1 October 2020, the debtors retained Force 10 Partners to provide advisory services to help address operational and financial challenges. Over the past several months, Weiss said, the debtors implemented multiple steps to improve their financial performance, including retaining him as CRO.

While the debtors were dealing with these issues, they began engaging with the prepetition term agent in December, ultimately leading the parties to enter into a forbearance agreement and amendments to their credit agreement on 8 February.

Although the debtors achieved some success from their operational initiatives, it became clear that they had to look into strategic alternatives. In January, the debtors retained Pachulski Stang Ziehl & Jones as restructuring counsel and Jefferies as investment banker.

In January, Jefferies kicked off a “robust” marketing process to sell CarbonLite’s assets, Weiss said. As of the petition date, Jefferies has contacted about 135 potential buyers to tell them about the debtors’ interest in pursuing a transaction. Weiss said as of now, 73 interested parties have executed non-disclosure agreements and have been given access to information in an electronic data room. The debtors have received eight indications of interest and nine parties have expressed interest in serving as a stalking horse.

The debtors have four DIP facilities to fund their case while they pursue a sale process. The PA debtors are seeking approval of a new money USD 15m DIP facility with UMB Bank as agent, while the TX debtors have a USD 25m new money DIP facility and a USD 50m roll-up of prepetition bond debt. The third and fourth DIPs are both for the CA debtors. The first is a USD 65.5m facility that consists of USD 20m in new money financing and a USD 45.5m roll-up of prepetition debt under a term loan. The second DIP for the CA debtors is a USD 18.5m new money ABL facility.

The milestones require the debtors to conduct an auction, if there are competing offers, within 60 days of the petition date, and get sale approval within 65 days. The sale needs to have closed within 75 days of the petition date, although that deadline will be automatically extended to allow for necessary regulatory approvals associated with the sale, according to court documents. 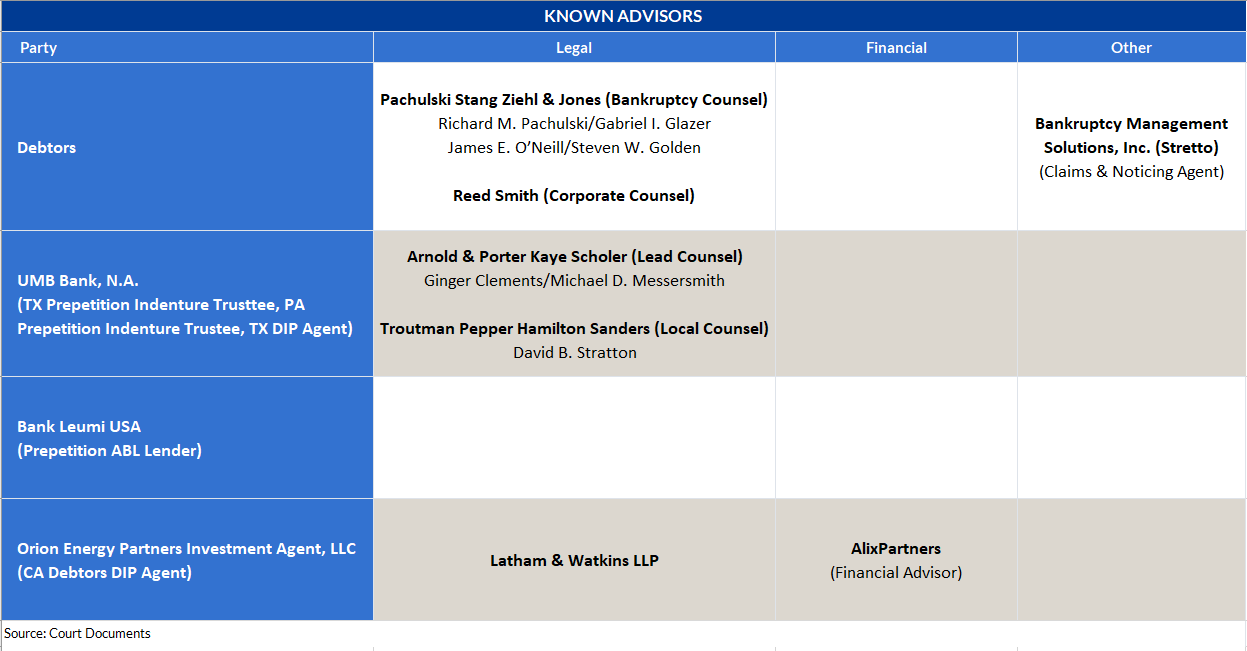