American Purchasing Services LLC (APS), a distributor of medical supplies and equipment, has sought bankruptcy protection to complete an organized winddown and continue ongoing bulk sales of its inventory.

The company, which does business as American Medical Depot (AMD), filed a Chapter 11 petition on Friday (11 December) in the US Bankruptcy Court for the Southern District of Florida, reporting USD 10m-USD 50m in assets and USD 50m-USD 100m in liabilities. The company, which earlier this year lost a government contract that had made up a significant share of its revenue, has tapped Tiger Group as a liquidation consultant to help auction off its inventory. AMD is looking to use the bankruptcy process to continue efforts to sell off its remaining inventory that began prior to the Chapter 11 petition.

A first-day hearing is scheduled for this afternoon before Judge Scott Grossman. AMD has filed a slate of customary first-day motions, seeking authority to maintain its bank accounts, use cash collateral and continue providing wages and benefits to its employees.

AMD launched in 1983 in Florida and focused its business on distributing medical, surgical, dental and laboratory supplies and equipment, according to a first-day declaration from Dennis Gerrard of CR3 Partners, who serves as AMD’s chief restructuring officer. The operating business is owned 100% by a parent entity formed in 2010, American Medical Depot Holdings LLC, which is also a debtor in the Chapter 11 case.

The company started as a warehouse operating out of one bay door and later added a second bay door. Within a year of its launch, AMD began earning government contracts, which eventually spurred further expansion as the company grew its number of distribution centers to meet obligations under an increasing number of those contracts, said Gerrard.

AMD initially based its operations out of Opa Locka and Hialeah, Florida, but as the company grew, it moved to a consolidated facility in Miramar, Florida. The Miramar location continued to serve as AMD’s headquarters and includes a warehouse for inventory. Additionally, AMD has a distribution center in Tampa that the company used in combination with its Miramar operations to service a contract for Veterans Administrations (VA) hospitals across the state of Florida.

AMD in 2016 secured a “next generation medical surgical prime vendor contract” with the VA, which set the company up to service 70 VA hospitals along the east coast. That contract was expected to bring USD 1.2bn in value over a five-year period. To service the contract, AMD warehoused inventory in its existing Miramar and King of Prussia facilities, and later added distribution centers in Whitsett, North Carolina, and Schenectady, New York, said Gerrard.

Prior to August of this year, about 85% of AMD’s business stemmed from government contracts while the remaining 15% of the business flowed through non-governmental group purchasing awards and alternate site operations. Starting in late August, however, AMD effectively stopped operating its normal business and, instead, “focused exclusively on selling their assets and collecting accounts receivable in order to, among other things, pay down their secured debt in accordance with their loan documents,” said Gerrard.

The company’s switch from operating to liquidating came after its VA next generation contract lapsed on 1 April. As originally structured, the contract would have included two additional bridge contracts—one that would end in September and another that would run through the end of March 2021. But the VA terminated the first of those bridge contracts effective on 1 August.

As of its Chapter 11 petition, AMD had 29 employees, with 12 earning hourly wages and 17 paid salaries, according to Gerrard. The other affiliated co-debtor that with operations, AMD Pennsylvania LLC, has another four employees—three hourly employees and one salaried employee. 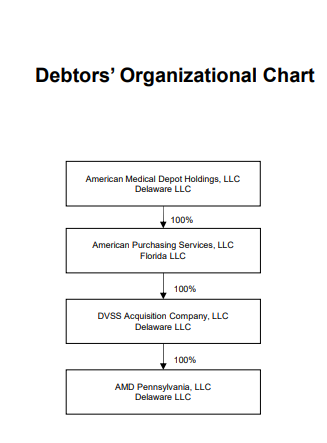 AMD’s debt obligations include a senior secured revolving line of credit, junior secured debt and general unsecured debt, most of which is owed to a defined group of vendors. 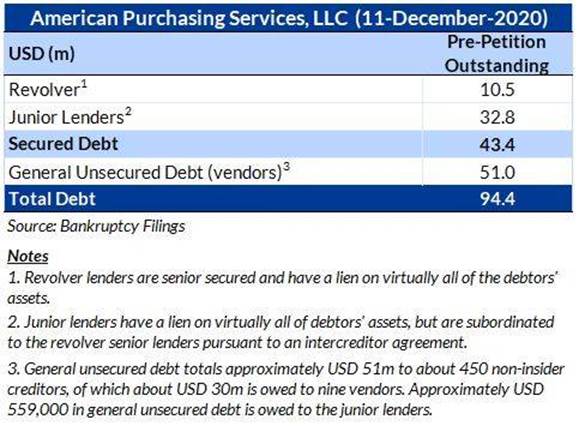 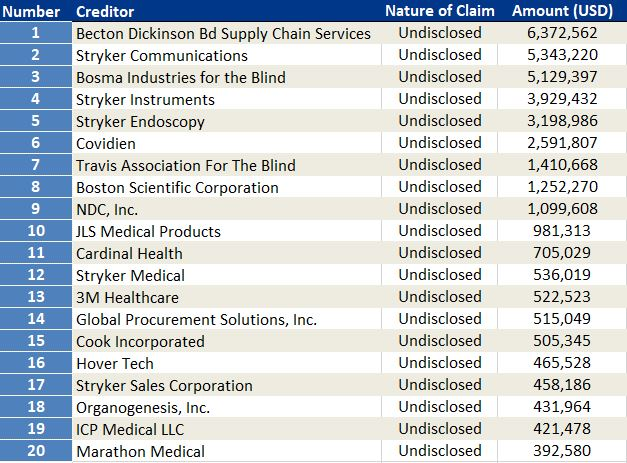 Gerrard pointed to a confluence of factors as the explanation for AMD’s Chapter 11 filing. Among its recent troubles, AMD has faced challenges since the coronavirus pandemic began gripping the US economy. Gerrard noted that, as elective surgery and medical procedures decreased during the COVID-19 era, AMD’s customers have suffered and began reducing their purchases.

Additionally, AMD’s business took a blow when the VA allowed the next generation contract to terminate earlier this year. That contract had required AMD to maintain certain levels of inventory to ensure that the VA hospitals the company supplied would have ample access to the equipment they needed.

“That meant that after the VA reviewed and approved usage amounts of products on a monthly basis, AMD was required to purchase the inventory using its bank credit and store it in its warehouses until the VA facilities affirmatively ordered the products for delivery,” Gerrard said in this declaration. “With increasing frequency, however, the VA facilities failed to purchase the inventory that they forecasted was needed. Consequently, AMD’s operations and finances were severely impacted because AMD utilized about USD 17m of its working capital line of credit for purchases of inventory.”

Gerrard went on to note that much of the inventory that AMD built up in anticipation of supplying it to VA hospitals “remains stockpiled” at the company’s distribution centers. While AMD has not been able to sell the supplies at the wholesale prices the company expected, it has remained on the hook for interest payments on the debt AMD incurred to stock up on the inventory.

As a result of the drop in purchases and loss of the VA contract, AMD has substantially downsized its operations since August. Before 1 August, the company had a total of 174 employees, with 145 working at AMD and 29 working at co-debtor AMD Pennsylvania. AMD shed more than 140 employees between August and the end of November, according to Gerrard.

In October, Tiger Group as liquidation consultant, marketed AMD’s inventory for potential bulk purchases at six of the company’s facilities. The liquidator noted in a 15 October press release that a portion of AMD’s remaining inventory consisted of personal protective equipment, products that have been in demand across many parts of the US as the COVID-19 pandemic persists and case levels remain high.

Now under Chapter 11 protection, AMD intends to continue efforts to offload its inventory. With that in mind, one of the company’s early filings in bankruptcy court is a motion seeking to assume a consulting agreement with Tiger to continue its liquidation of AMD’s medical supplies and equipment.

Gerrard said that, prior to the bankruptcy filing, Tiger conducted three private bulk sales and has since focused its attention on auctioning off the remaining inventory. Tiger has conducted a pair of online auctions, covering inventory at AMD’s King of Prussia warehouse in Pennsylvania and Vernon warehouse in California.

AMD anticipates another four auctions to occur postpetition—specifically, Tiger is running auctions for inventory at the company’s Miramar and Tampa facilities in Florida, its Whitsett facility in North Carolina, and its Schenectady facility in New York. Tiger is looking to conclude those four additional auctions by mid-January, according to Gerrard.

All told, AMD hopes while in Chapter 11 to complete a bulk sale of about USD 19m worth of inventory and collect about USD 15m in outstanding accounts receivable (AR). AMD said the VA owes the company about USD 3.1m of the total AR. 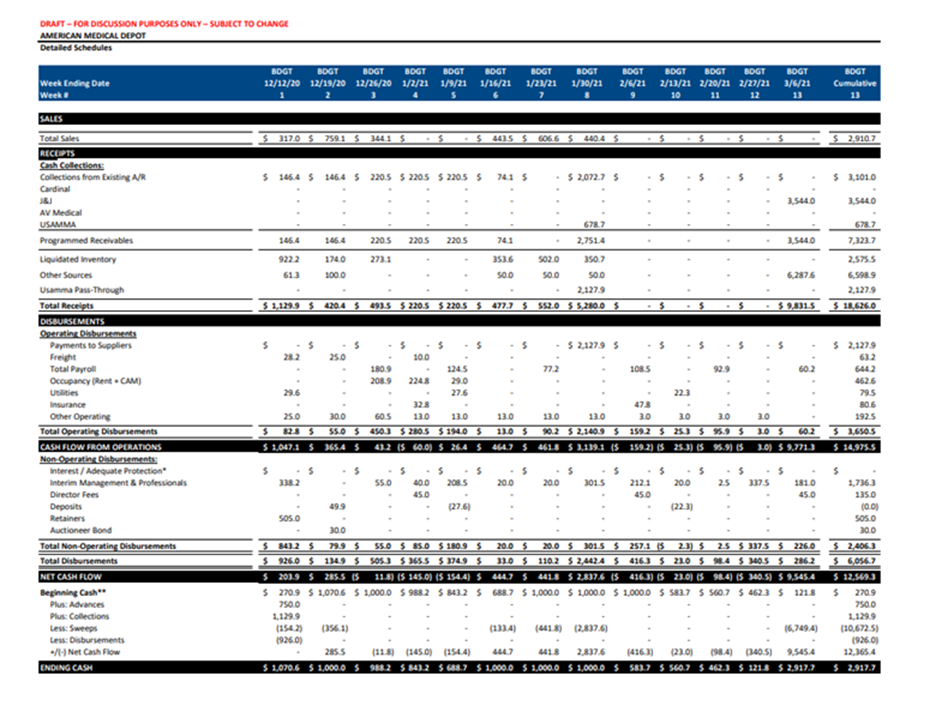